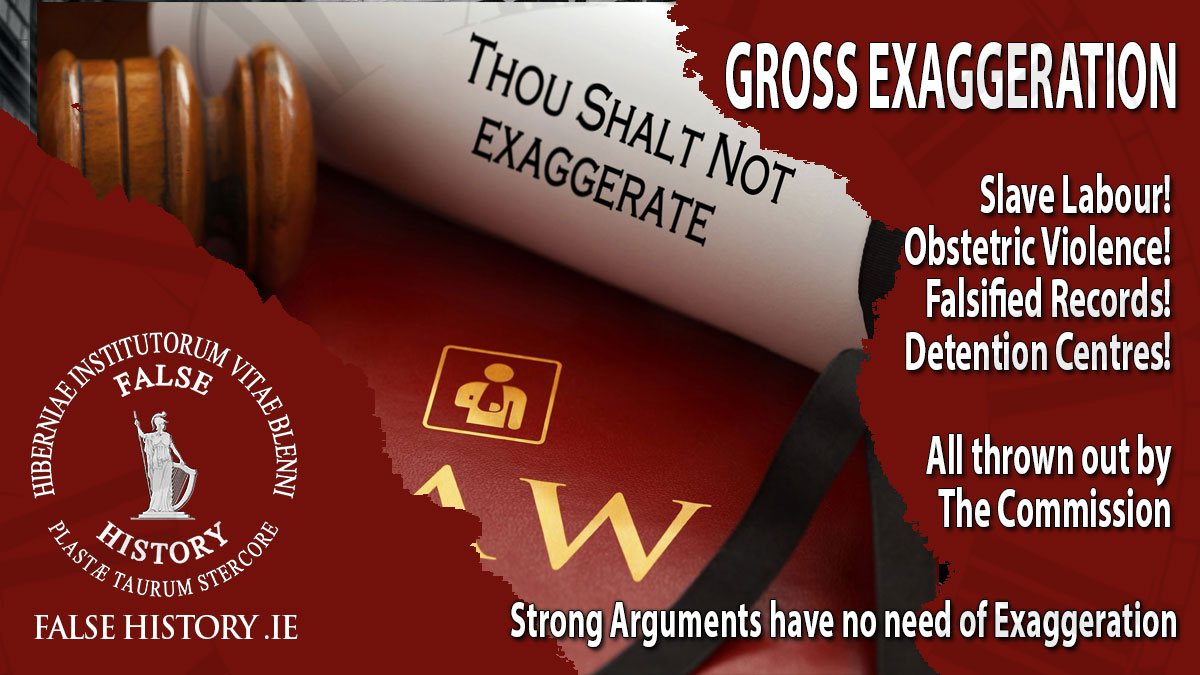 Article No 2 in the series of a commentary on Alternative Mother and Baby Homes Report, authored by 21 Irish legal academics and one sociologist.

Exaggeration is the pillar of comedy, we can all spot it, and the resultant absurdity is so unrealistic, it causes laughter. In the area of science concerned with studying the behaviour of persuasion, exaggeration has also been shown to damage credibility. Consequently, exaggeration diminishes the credibility of the story being told, and the more exaggerated a claim is, the closer it is to falsehood. Outside Ireland, lawyers are taught that using exaggeration to hide bad facts or weak arguments will fool no one. Yet at least 22 teachers of law at Irish universities have produced and published a document thinking that exaggeration will bolster their claims, unaware of its potential to create comedy. Quality argument based on genuine facts are strong enough to stand on their own, especially in a functioning intellectual tradition, which is its most powerful instrument of persuasion. [Read the first article here]

Chores exaggerated into charges of slave labour
Nearly every inpatient or inmate of an institution — worldwide —in the past were given chores to do. Today such chores are titled ‘occupational therapy’ as sitting idle all day is conducive to poor mental health. These chores like making one’s own bed, doing one’s own laundry, preparing food and feeding one’s own infant are now falsely made out to be ‘slave labour’. The same domestic duties which women and girls would be ‘forced’ to do at home they did in institutions. It is not considered slave labour in the past, nor it is not slave labour today. It’s a gross exaggeration, the type which has no business in academic work and would be thrown out with the garbage in any educational system which had functioning quality control mechanisms.

The slavery claims could not pass muster in any generation which came before the recent generations of leisure. At the tender age of five Ireland’s president, Michael D. Higgins and his younger brother were sent to live on his uncle’s farm. They performed the chores that every child was expected to perform.[1] Males were given physically harder work than females, all in keeping with their perceived strengths and abilities. If one is going to redefine this unpaid work as slave labour, then Michael D., myself and millions of others will be entitled to claim to be victims and claim compensation from the taxpayers. The beauty is of course that the leisure generations will be paying the compo.

The slave labour exaggeration evinces the presence of perniciousness in the motivation of some academics, but it can also occur due to innocence. People who grew up in an affluent society, with massive amounts of leisure time, who were not expected to do unpaid chores, will find it difficult to imagine long hours of hard work expected of everyone — not just children — to earn their keep and improve their lot. Michael D. secondary school education was not free. His graft as a young boy and that of his relatives financed his education and his success.

Those generations who endured so much, and worked so hard, that the following generation would have a better life than they, are now pilloried as backward and misogynistic. The reality is that most of Ireland’s academics, for generations back, are there because of the hard graft of their pauper ancestors. They are mere social climbers parroting the prejudices of the elite to social elite to obfuscate their ancestral poverty.

One thing is clear to all who read the alternative report, that the intended target is the church and religious women. The authors fail to distinguish between conditions in secular run institutions (County Homes) and in religious run institutions. Accordingly, the authors miss the opportunity to report the most pertinent of the commission’s findings regarding work, that ‘no mother and baby home inflicted a workload on the mothers comparable to that in county homes’.[2]

The commission states clearly and presents the evidence in abundance that women were far better off in religious run institutions than in the secular variety. However, the commission themselves at times over overstate the workload in County Homes, viewing such work through the eyes of the wealthiest generations in Irish history. Generations who never had to do chores, have no experience of living in unsanitary households, have never slept in the same room as cattle, have never slept in an open dormitory or a long ward, have never used or do not know what a chamber pot or bourdaloue is, have never done the laundry or washed seed in ‘Chamber lye’ (made from urine and wood ash), have never got a bite from typhus carrying louse, and so on.

If that were not bad enough, most academic research is conducted by people who have never been out of school and have no life experience beyond a middle-class upbringing. There is little chance of such individuals being able to comprehend the living conditions of the past without extensive education. That education should be available, especially within the teaching of history. However, it is not available because many Irish people are embarrassed to admit the conditions which their forebearers lived in. It is still not unusual to spot, at graduation day, humble parents, of humble origin, who sacrificed much and worked hard to gift their offspring a college education. Such graduates have been injected into a new class and are keen to disavow their parents and origins for fear that their fellow big knobs will look down on them. Of course, many of their new cohort are of similar humble origins, have similar fears and illusory is reinforced by the group. The upshot is that college graduates are very poorly equipped to be able to analyse historical evidence, and it is abundantly evident in both the official commission report and in the alternative academic report.

Diane B. Kraft College of Law at the University of Kentucky writes that ‘many authors of books on legal writing advise law students not to exaggerate when writing fact statements and arguments in briefs’. […]

If the facts or arguments are on your side, you don’t need to exaggerate them to win. If they’re not, you’re not going to fool anyone by trying to hide bad facts or a weak argument with exaggerated claims about your client’s or the opposing party’s case. Writers use hyperbole thinking it will bolster their arguments, but it often has the opposite effect of signalling to the reader that the facts or arguments are so weak, the writer can’t rely on them alone to win. [3]

If teachers of law at American universities can see the perils of exaggeration, why are their counterparts in Ireland not in possession of such knowledge? That in turn leads to big question, are the clients of Irish lawyers badly served?

As I was writing this article, an article appeared in the Irish Times giving bodice to judges who were complaining about the quality of the work of many barristers. They accused them of making claims without any corroborating evidence and submitting documentary evidence below the required quality standards.

Mr Justice John Edwards sitting in the Court of Appeal said, ‘the practice of barristers giving evidence on a hearsay basis without providing corroboration is “happening all the time” and “has to stop”.’[4]

[1] Duggan, ‘Brothers Had to Work Hard Growing up on Rural Farm’.

POLITICO. ‘The Doctor Who Brought Abortion out of the Shadows in Ireland’, 20 March 2018. https://www.politico.eu/article/ireland-referendum-abortion-rebecca-gomperts-a-hard-pill-to-swallow-in-ireland/.