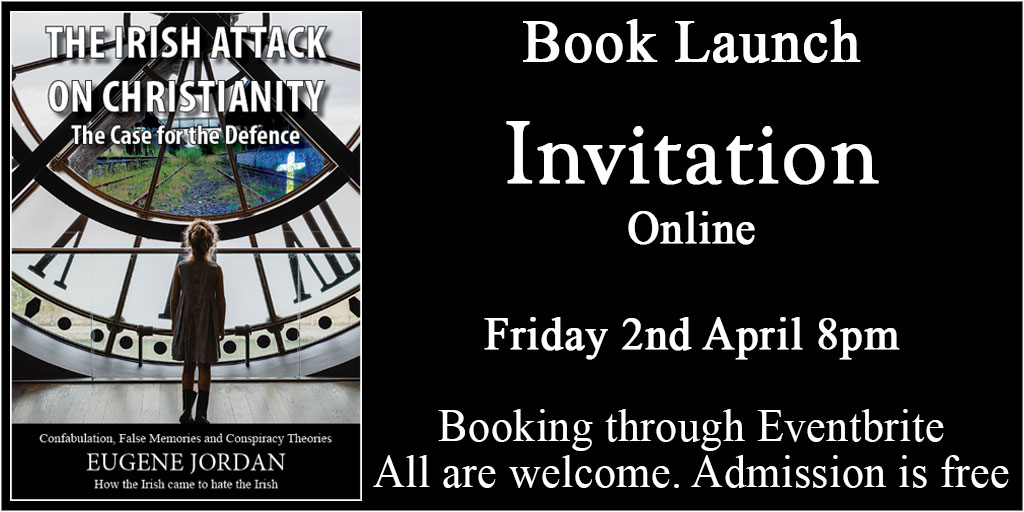 The Irish Attack on Christianity – The Case for the Defence

The mother and baby homes scandal is but one example of the Irish abuse of history with many of its falsities guarded from public view. All historical debates have historians on at least two sides, but Irish historical scandals are remarkable for the lack of dissenting historians, who have been silenced or are totally disinterested in the subject. The other side of the story has not been told until now.

The book takes an empirical look at the mother and baby homes scandal and others in what the author claims to be Ireland’s greatest history scandal. A scandal founded upon false allegations, bad history and incompetent statistical interpretation. It drew its oxygen from populism, cultural biases and the prospect of compensation, and it grew into a triumph for ignorance. Babies were not starved to death by religious women, women were not banned from sitting on juries, nor were they banned from doing work ‘unsuited to their sex’ nor did the state create a ‘brutal carceral’ system to confine wayward women. The underlying causes of the mother and baby homes scandal have been allowed to fester for decades due to a breakdown in the quality control systems in academic history. The aim of the book is to apply the quality control methods which should have been in use and seek to discover the reasons for their failure.

Published in March 2021, it is the first book to be released critiquing the final report of the commission of investigation into mother and baby homes released two months earlier. The commission have done a good job in places but have made significant blunders through a lack of knowledge of statistical interpretation, they had no more than an amateur knowledge of vintage medicine, relied on non-fact checked academic historical writing and of course, presentism. That is interpreting the past through the eyes of today.

Written for a general audience, the book goes in search of the causes and finds the evidence to present to readers in order to restore some balance and common sense to Irish history.

Eugene Jordan is an expert in the field of historical medicine and science. He holds degrees in science, psychology, history and a master’s degree in information technology. His Facebook blog on Irish Medieval History has over 230,000 followers and is still growing. Over the years, he has published many articles, including lessons for historians in the Tuam Mother and Baby Homes Scandal, published by the Federation of Local History Societies in 2018. He is the Vice Chair of Moycullen Heritage, past president of one of Ireland’s oldest academic heritage societies, Galway Archaeological and Historical Society and former chair of the city’s Civic Trust. He continues to give public lectures on diverse topics, from the science behind Formula One Racing to the meaning of Irish place names.

The Irish Attack on Christianity – The Case for the Defence is published by Tafannóir Press. tafannoirpress@gmail.com The book will be available for purchase online, at a special launch price of €20 including postage, at falsehistory.ie and as an eBook from Google Play Books.

The book launch will be held online using Zoom and will consist of a short presentation by the author, followed by a question and answers session. Questions can be asked in person or by using Zoom text messaging. The presentation video will be available shortly after on the Irish History Facebook Page, @trueirishhistory, and also on falsehistory.ie

The book launch event takes place online using Zoom at 8pm Friday 2nd April. Places can be booked using Eventbrite. A link will be sent to all who have registered which can be clicked on to access the event.

The printed version of the book is available from.

Use this discount code and get the book including postage for €20.00 or €22.00 shipped internationally€8.00 off the recommended retail price. Code: launch2021

Available also as in eBook format from Google Play Books

Now available with 60% off as a special book launch price. Now €9.99 Hurry this is limited time offer.