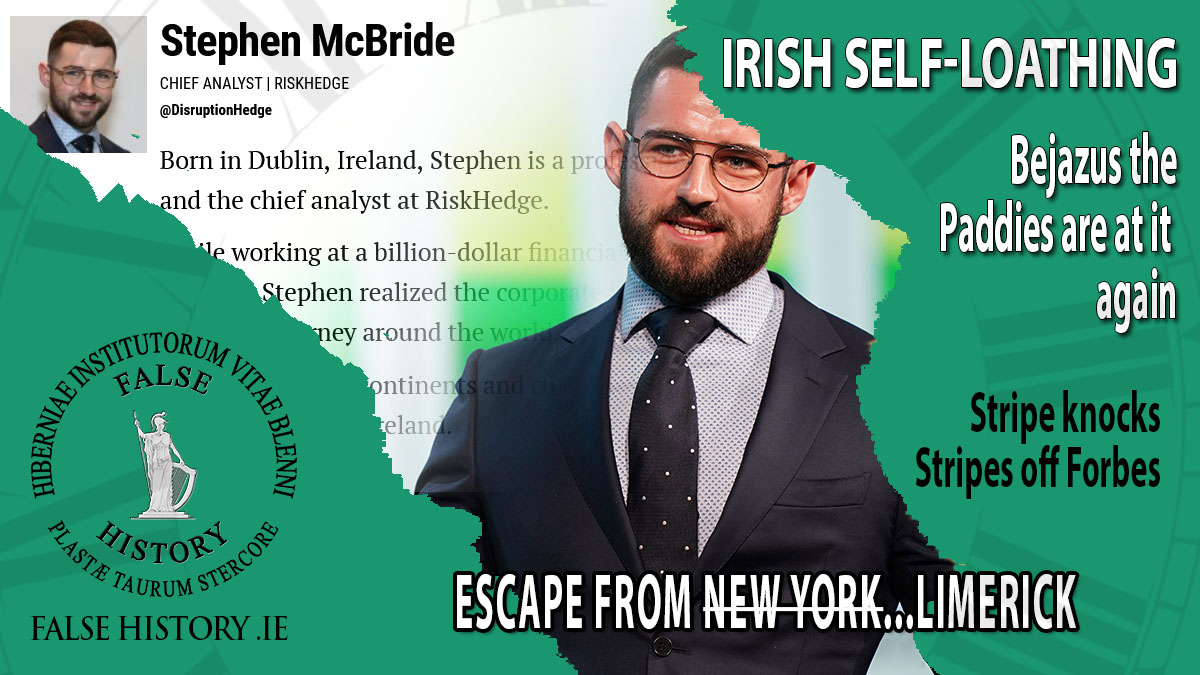 More bloat has been added to the already distended corpus of Irish literature dedicated to Irish self-loathing. It is a genre of racist literature mostly written by Irish people and the latest expression to come to international attention was written by an Irishman, Stephen McBride. The American Forbes business magazine has pulled the article after an outcry from the public, politicians and the billionaire Collison brothers who hail from Limerick city.

McBride wrote that ‘Many folks think Ireland is all rolling green hills and five-star golf courses. But in the middle of the Irish countryside is a city called Limerick — known as the “murder capital” of Europe.’ Written under the headline ‘How Two Brother Escaped ‘Stab City’ And Made $11 Billion’.

The article was about John and Patrick Collison who are the founders of ‘Stripe’ an online payment processing company for internet businesses. Their success has ranked the two young men amongst the youngest self-made billionaires in history. McBride asserted that they left a ‘warzone’, Limerick City, for Silicon Valley saying they beat the odds to get out.

Patrick Collison responded: ‘Not only [is it] mistaken about Limerick but the idea of ‘overcoming’ anything is crazy. […] We are who we are because we grew up where we did.’ John, responding on Twitter, described the article and its claims as ‘daft’.

McBride from Dublin, a city which was the centre of British power in Ireland for centuries has a long history of anti-Irish prejudice entwined in its culture. Accordingly, Dubliners are nicknamed ‘Jackeens’, a short for ‘Union Jackeen’, from the British flag which was traditionally flown from the male part of a ship, its jackstaff. Thus, ‘Jackeen’ literally means little penis. However, sneering at other people is not only deeply engrained in the psyche of the whole Irish nation, but also is the main national pastime. Every day the newspapers and broadcast media have at least one article which can be classified as Irish self-loathing. As daft a pursuit it may appear to be, there are enormous psychological benefits to be gained from sneering at other people.

Humans are hierarchical animals and the height of the position we see ourselves as holding on that hierarchy is vital to our feelings of self-esteem and self-worth. Self-esteem is a personal perception of how much value they have for themselves. Self-worth is a person’s perception of the value they think they bring to society.

When upward social mobility is difficult or impossible the human mind will naturally create illusions of higher social standing than can be justified or displayed publicly through adulation or prestige possessions. The easiest and instant way to achieve a feeling of upward social mobility is to denigrate other people and or social groups. Wherever the denigrated are ranked on the social scale, the denigrators will view themselves as having a position just above. In other words, they put people down so that they can feel themselves to be their social superiors. That is the genesis of the prejudices and perhaps the genesis of all prejudices and can be found in affluent circles as well but expressed through different behaviours.

The denigration of others is deeply embedded in the culture of some sections of Irish society, and is transmitted from generation to generation through their family history of impoverished ancestors, who were at one time firmly rooted at the bottom of the Irish social strata.

Irish people who sneer at the Irish seem blind to the fact that they are sneering at themselves, family, friends, and they too sneer back at the sneerers, which is why it is a self-loathing. The sneers revel in their illusions of superiority, but the reality reveals a psychological overcompensation for social deficits.

You can take the man our of the bog, but you cannot take the bog out of the man.

FYI Paddy: California has a murder rate over four and a half times that of Ireland!

Irish self loathing is a serious issue for Irish society and is not a victimless pursuit. The causes and the resultant malignancy are explored in detail in the book The Irish Attack on Christianity – The Case for the Defence