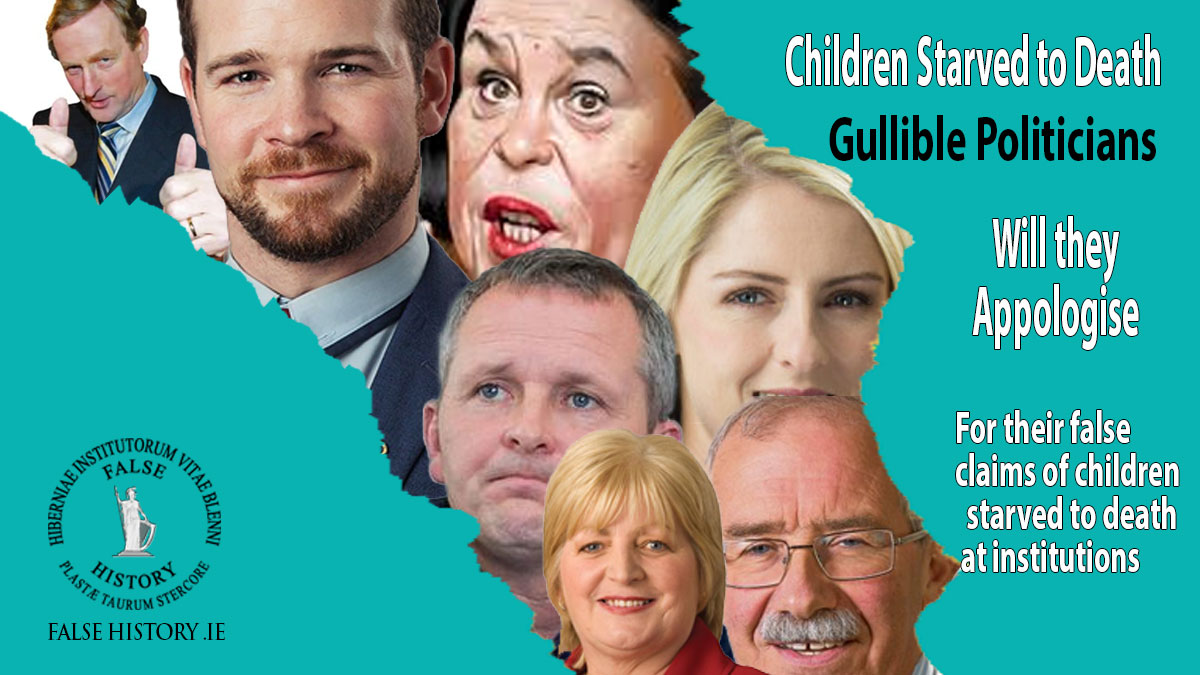 Politicians out to fool the people jumped at the chance to fabricate notions of murderous women, both protestant and catholic who were  killing babies at mother and baby homes.  They took the word marasmus, which appeared as a cause of death on a small number of death certificates as evidence of starvation. It was a lie, and that has been proven Final Report of Mother and Baby Homes Commission of Investigation. Will they have the guts to do the right thing and apologise for misleading the people? As ever truth and politicians are seldom bedfellows.

However, marasmus was a frequently cited cause of infant deaths in institutional, hospital and community settings in early twentieth-century Ireland. The Commission considers it unlikely that deaths in hospitals and family homes were due to wilful neglect and so cannot conclude that the term marasmus denotes wilful neglect in mother and baby homes. The more likely explanation is that marasmus as a cause of death was cited when an infant failed to thrive due to malabsorption of essential nutrients due to an underlying, undiagnosed medical condition.

In 1939, the Government’s Deputy Chief Medical Officer refuted damning public and health inspectorate concerns in regard to the standards of care at Bethany Home on the basis of a barbaric belief that it was normal for children of unmarried mothers to suffer from starvation. While no action was taken by the Government to protect the children in Bethany Home, which was a Protestant run home, the State did force the home to cease admitting Catholic mothers and babies. What does that say about the State, its orientation and actions?

Evidence in the public domain and records held by Departments tell us this, yet the Minister of State will table an amendment to the Sinn Féin motion that is beyond a distortion of the truth. She has underpinned her amendment with an argument set out in the same vein as that used by the State’s deputy chief medical adviser in the 1930s. He was of the view that children born outside of marriage were prone to starvation and, judging by the amendment before us, it appears the Government shares this view.

In 1939, the State’s Deputy Chief Medical Officer visited Bethany and attributed the ill health of children – rickets, scalding and purulent conjunctivitis – in the home to the fact that they were “illegitimate” and, therefore, “delicate” and prone to starvation. Are the Minister of State and the Government supporting that view in 2013?

The State colluded. In 1939, for example, the deputy chief medical adviser, Dr. Winslow Sterling Berry, dismissed public concerns and even the concerns of his own health inspectors, by claiming that it was “well known that illegitimate children are delicate and marasmic” – in other words, that they suffered from starvation.

Records reveal that 54 of the children had died from convulsions, 41 from heart failure and 26 from marasmus, a form of malnutrition.

Sterling Berry, in 1939. In his report, Berry reported that it was well recognised that a large number of illegitimate children were delicate and marasmic, which means they were suffering the effects of starvation. I stress that this is from the report of an inspection of the home by the State. Was the State involved, was it indifferent to their plight and did the State fail them? The answer is obviously “Yes”.

The big question that arises during this debate, when one steps back from the apology, is why it took the State so long to accept that it played a central and crucial part in supplying the women who were enslaved, starved, ill-treated, abused and treated with cold contempt.

Cemetery records indicate that the causes of death included 54 from convulsions, 41 from heart failure, 26 from starvation and seven from pneumonia. [the death certs record marasmus not starvation]

State inspection reports described children as being fragile, pot-bellied and emaciated. Cause of death was regularly recorded as starvation. [marasmus]

Children died of starvation or were used as guinea pigs, while families were ripped apart. It is an appalling stain on our history.

Young women were forcibly separated first from their communities, then from any sense of pride or self worth and then from their babies. Their babies were neglected and starved, with illnesses untreated. They were seen as worthless and buried, ultimately, in unmarked graves, left in the end without even an identity.

Women’s children were starved and disease, including TB, was rampant. The child mortality rate was massively higher in these institutions than among the general public and the State allowed this to go on.

State inspection reports described children as being fragile, emaciated and pot-bellied. Cause of death was often recorded as starvation. [marasmus]

What was uncovered in Tuam is only the tip of the iceberg. We do not know exactly how these babies died and it seems likely they were left to starve or die in the cold, as the mortality rate is too high to suggest otherwise.

In Sean Ross Abbey, the death register lists a total of 269 deaths between 1934 and 1967, but some of those buried in the plot there are not listed on the register. It is also deeply shocking and appalling to learn that the main cause of death in the case of some 20% of the deaths in Bessborough was marasmus or severe malnutrition – in other words, death by hunger was happening in the 1940s and 1950s in Cork. At a minimum, we need to expand drastically the terms of reference of the commission of investigation into mother and baby homes.

According to a former chief medical officer of the State, James Deeny, in his autobiography, To Cure and to Care, in one year alone, of the 180 children born in the home 100 died. One in five of those who died in the 1934 to 1953 period died of marasmus, that is, severe malnutrition.

There were 472 deaths in 19 years in the Bessborough home. Some 80 of those children were suffering from marasmus, which means severe malnutrition, including babies who have in many cases been taken away from the arms of their mothers, who have not been allowed to breast-feed them. Children suffering from malnutrition – an issue which is easy to control, deal with and address – represent almost 20% of known deaths in a short period in the Bessborough home alone, as we heard in the story earlier.

Women were starved, neglected and hidden from society. They suffered horrendous abuse. It is imperative that we now respond with sensitivity and respect to what has been unearthed.

We gave them up because of our perverse, in fact, morbid relationship with what is called respectability. Indeed, for a while it seemed as if in Ireland our women had the amazing capacity to self-impregnate. For their trouble, we took their babies and gifted them, sold them, trafficked them, starved them, neglected them or denied them to the point of their disappearance from our hearts, our sight, our country and, in the case of Tuam and possibly other places, from life itself.

They have come up to me and started telling the story of what they went through – the starvation, abuse, malnutrition and the fact their spirit was broken. That is what we did. We stripped people and took their clothes away. We took their identity, beat them and starved them. This was all done for what was supposed to be the greater good of some individuals or idea.

Vol. 963 No. 7 Report of the Joint Committee on the Eighth Amendment of the Constitution: Statements (Resumed)