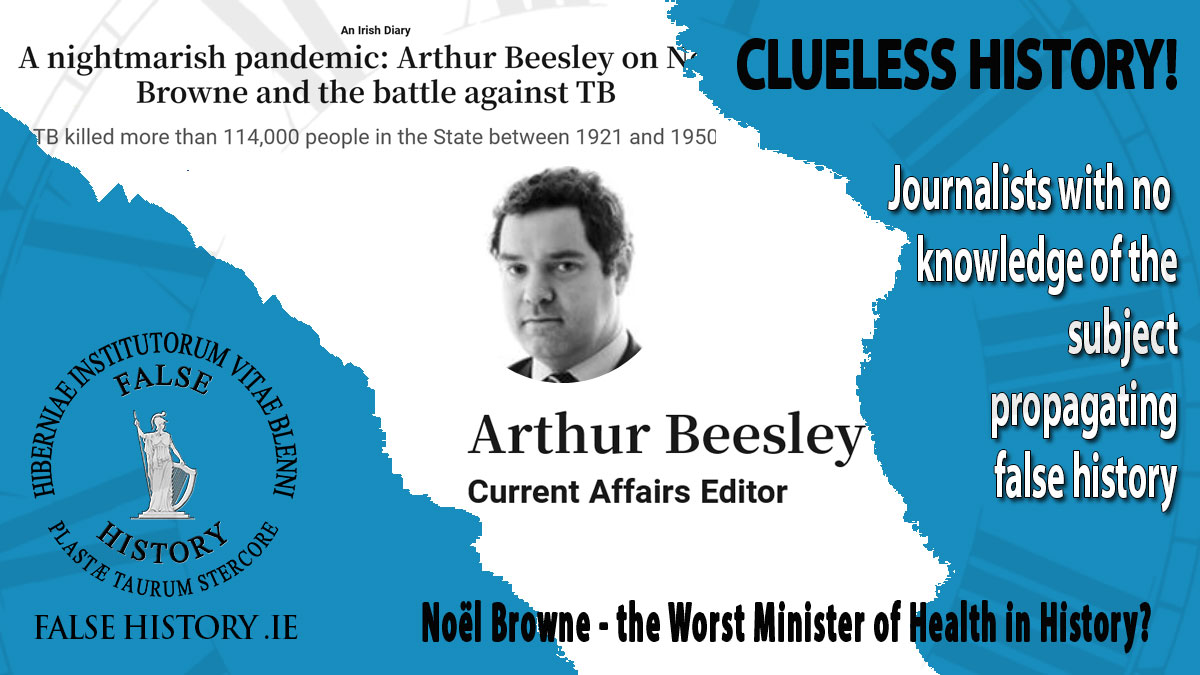 Arthur Beesley knows little of the history of Ireland and less about the medical history of the nation, but he feels himself qualified to write articles which are not historically accurate but are continually propagated to warm the cockles of every self-loathing leprechaun. Beesley is listed on the Irish Times website as their Current Affairs Editor, listed elsewhere with only a qualification in journalism from Dublin City University. In a recent article in the Irish Times Beesley repeated the hogwash and false history surrounding the Irish nation’s battle with Tuberculosis. Beesley states:

“It was only after a crusade led by Dr Noël Browne, health minister from 1948 to 1951 in the first coalition government, that control was finally asserted over the disease.”

Browne of course was not only a keen promoter of this myth but the actual founder of it. He set himself up as the darling of the nation, one of our national superheroes but he was in fact claiming credit for work of other people, chiefly that of Dr James Deeney. Many historians have remarked of Brown’s autobiography that it was notable for its dishonesty. However, Browne continues to fool the likes of Beesley who have no knowledge of the subject and have not read any independent analysis of the claims made by Browne.

Beesley even manages to credit Browne as the instigator of “a huge programme to build hospitals and sanatoriums”. Anyone with the slightest knowledge of history or the ability to do basic historical research will know of the Tuberculosis (Establishment of Sanatoria) Act, 1945. Yes, three years before Browne came to power, the Irish government had set about its huge programme “to build hospitals and sanatoriums”. The programme was formulated by Dr. James Deeney, who at that time was the Chief Medical Advisor to the Government and his officials at the department. The ambitious building and reform programme was stalled because of the second world war, but the officials wasted no time at the war’s end, to set about reorganising healthcare within the state. One part of their reforms was to create a separate department of health in 1947. Dr. James Ryan was the first Minister for Health and Browne quite by accident, became the second Minister for Health in 1948.

When the Regional Sanatoria building project was about to go ahead, the Canadian tuberculosis establishment had offered to take Irish doctors to train and study with them in Canada. Accordingly, Dr. Deeney invited a group of sanatoria officials to discuss the selection of candidates. The group arrived with Dr Noel Browne as their secretary.

Deeny later recalled of the meeting:

The discussion proceeded pleasantly until Browne took over. He made a lot of scathing remarks and was downright rude and insolent. Now I had stuck my neck out on this thing, had taken it in hand, got it going and was producing results. So I was not about to take calculated rudeness from a young sanatorium assistant, no matter how able, whose experience was extremely limited and whose remarks anyway were not helpful. Since he continued and no one could stop him, I terminated the meeting.

The next day someone from the group rang again on their behalf and apologised and asked might they return and I said ‘yes but without Browne’. I saw them again, they came as often as the wished and our relations were pleasant and their advice valuable. The day after Browne rang and asked might he come in. I said come along and he did and apologised for his remarks. We discussed things in a completely friendly way. In the conversation he said that he appreciated what I had managed to do so far and asked whether I would have any objection to his raising the matter of TB in public outside of medical circles.[1]

Browne had no hand act or part in the establishment of the TB campaign. All the work had been done by the time Brown arrived in power, just in time to take all the credit.

In reality Browne had big issues with his bad temper and loss of self-control, and it was this issue that was the main cause of his political downfall combined with his capacity for devious dealings.

For the real Noel Browne story, see this article.

For a far better history of the subject see…

Women in the Home – Feminist Lie

Child killers get a belt of a Crosier!