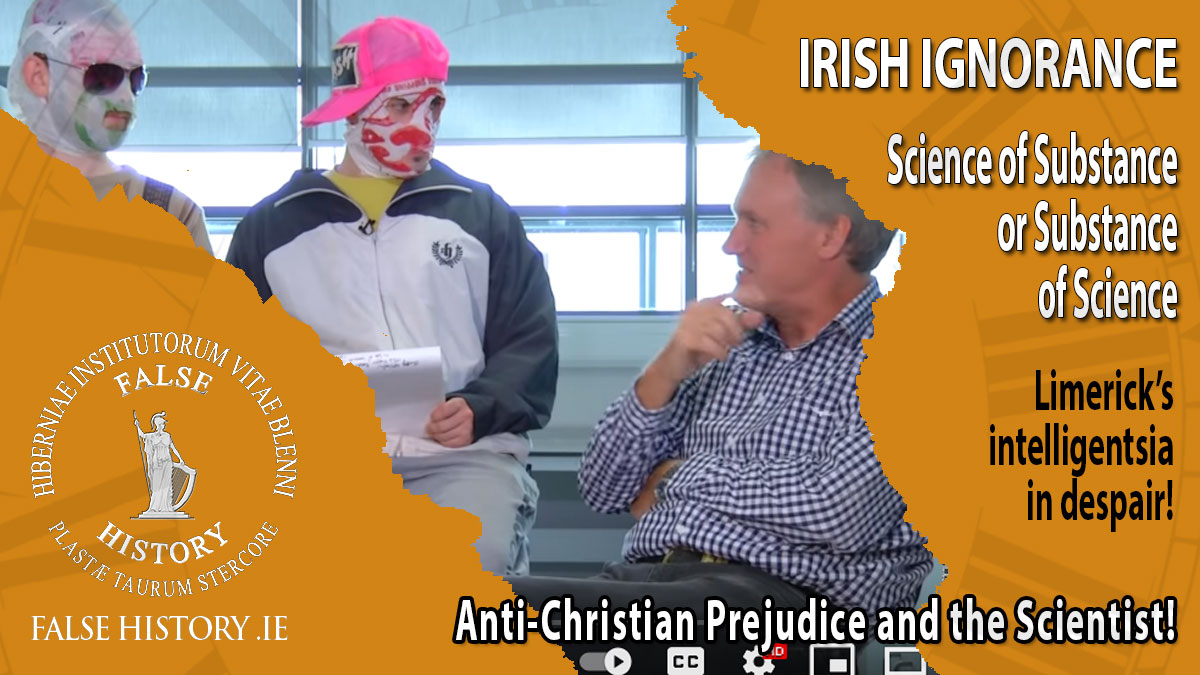 Unlike the Rubberbandits, the ancient Greeks has brains and put them to use trying to figure out the world and the universe. One of their big intellectual quests was to attempt to find out what life actually is. Their philosophy has come down to us in the from of transubstantiation and consubstantiation of the communion host. In yet another expression of Irish ignorance, and emblematic of the poor educational standards which now pervade in Irish society, Chambers and McGlynn have involved a professor of biochemistry in their continuing sneer at holy communion.

Religion and religious people have become the latest target of the sneering Irish SPUDs. SPUDing is a time-honoured tradition in Ireland and an inherited character trait of people who have little or no social standing. For centuries, little people in Ireland tried to feel like big people by creating illusions of high social standing through putting other people down. Religion was largely exempt from the machinations of the SPUDs as almost everybody believed at one time that religion was necessary for long term redemption.

Blindboy Boatclub (Dave Chambers) and Mr Chrome (Robert McGlynn) in their latest comedy skit appeared alongside Prof Luke O’Neill who they questioned repeatedly on the possibility of growing little Jesuses from a communion host. The professor replies repeatedly that it was not possible. It was supposed to be a comedy skit, but there was nothing funny except their Limerick accents and they thick way in which the question was repeatedly posed to the erudite professor.

Neither O’Neill nor Chambers and McGlynn understand transubstantiation and have taken it to mean transformation. The form, i.e. bread, never changes which is why it was never named transformation. If you change the form of any object, it becomes something else, cut the back of a chair and it becomes a table or a stool. Change a round wheel into a square, and it is no longer a wheel. However, a chair and all other objects can be made from many different substances. Accordingly, it is possible to transubstantiate most objects without transforming them. However, there is more to the word substance than meets the eye.

Sub comes from the Latin meaning under or below while stance means ‘to stand’, from the Latin ‘stare’ (p. star-eh). So literally it means under a stand. Accordingly, it is close to the word ‘understand’. However, despite various speculative theories, nobody understands the literal meaning of ‘understand’, but note the ‘stand’ element. Thus, I take it to mean that you can see what is supporting the stand or stance.

The ancient Greek philosophers reasoned that every object and being is supported by a stance or in other words, a ‘substance’, is something that stands under or grounds things. The substance of a human being is life..

The word substance in ordinary language derives from the philosophical sense but in a distorted way. Phrases like ‘a person of substance’ or ‘a substantial reason’ are a good example of this distortion. In chemistry, a chemical substance is a form of matter that has constant chemical composition and characteristic properties. It cannot be separated into components without breaking chemical bonds. Today, we tend to believe that a substance is matter but clearly by examining the literal meaning of the word it points to a concept underpinning the fundamental constituent of matter. Science is based in philosophy and its early pioneers were all natural philosophers accordingly the term ‘substance’ is firmly rooted in philosophy.

Karl Keating uses a shirt analogy to explain it:

Its colour is not the shirt itself, nor is its shape, its soft feel, or its (freshly laundered) scent. No one thing that your senses can perceive about the shirt is the shirt itself, and no combination of such things is the shirt itself. Your senses, on their own, are not capable of knowing fully what your shirt is. They miss its underlying nature. But your mind perceives the shirt’s underlying nature because it is able to bring together the information your senses gather about the shirt, and it extrapolates from there. It perceives the “shirtness” of your shirt, and “shirtness” is more than just the shirt’s color, shape, feel, or scent. In centuries gone by, philosophers called the underlying nature of a thing its “substance” and called its outward, sensible manifestations its “accidents.” Since that last word conjures up images of colliding automobiles, let’s use “appearances” instead.

Substance be understood as the essence of a being or a thing. For example, the essence of a human is life. What is life? It is one of humanity’s biggest questions, but science has no answer and has not been able to come close to providing an answer.

Life is defined as the absence of death. Take a recently deceased corpse, it contains all the elements to make a human, but it is not human because life is absent. Today with genetic engineering which can change the DNA of cell it can only work on living cells. We can tell the difference between a dead cell and a living cell, but we have no idea what life actually is. If we knew what it was then Victor Frankenstein would have made the greatest discovery ever in human history. The only scientists ever in the history of humanity to return life to where it was absent.

Humanity for millennia has struggled to find out what life actually is. The Greeks called the psyche, the Romans the animus which we now call the soul. This is the essence of the being, our substance, which makes us human is life, it is incorporeal.

All objects have a substance, and this can be changed without changing its accidents/appearances.

Science is limited to what the senses can perceive and a substance in the true meaning of the word cannot be perceived by the senses. Accordingly, science has its limitations, and most scientists know that science cannot investigate substance/essence and so don’t ever bother.

The Rubberbandits became corporeal thanks to the Rubberjohnnybandit who was known to haunt Limerick during the 1980s. He is thought to be the size of a leprechaun and is possessed of the amazing ability to whip a Johnny off while in use. One particular set of four victims of the Rubberjohnnybandit chose to be like the Beckhams and name their children after the circumstances of their conception, Boatclub and Chrome.

Limerick philosophers have debated substance and accidents ever since but the Rubberbandits were never allowed to be part of the intelligentsia. Although not considered intelligentsia outside of Limerick the resentment of their non-admission explains how the middle-class boys came to earn a living from sneering at the working class and all Christians.

Irish ignorance too is made from a substance imperceptible to the senses, but its accidents are palpable, injurious, toxic and smelly and as welcome as a fart in a space suit, to use the colloquial parlance of Mr Boatclub.

P.S. I wrote this in a Limerick accent.