‘History cannot be a dehumanised, reductive, simplistic or self-serving narrative’ 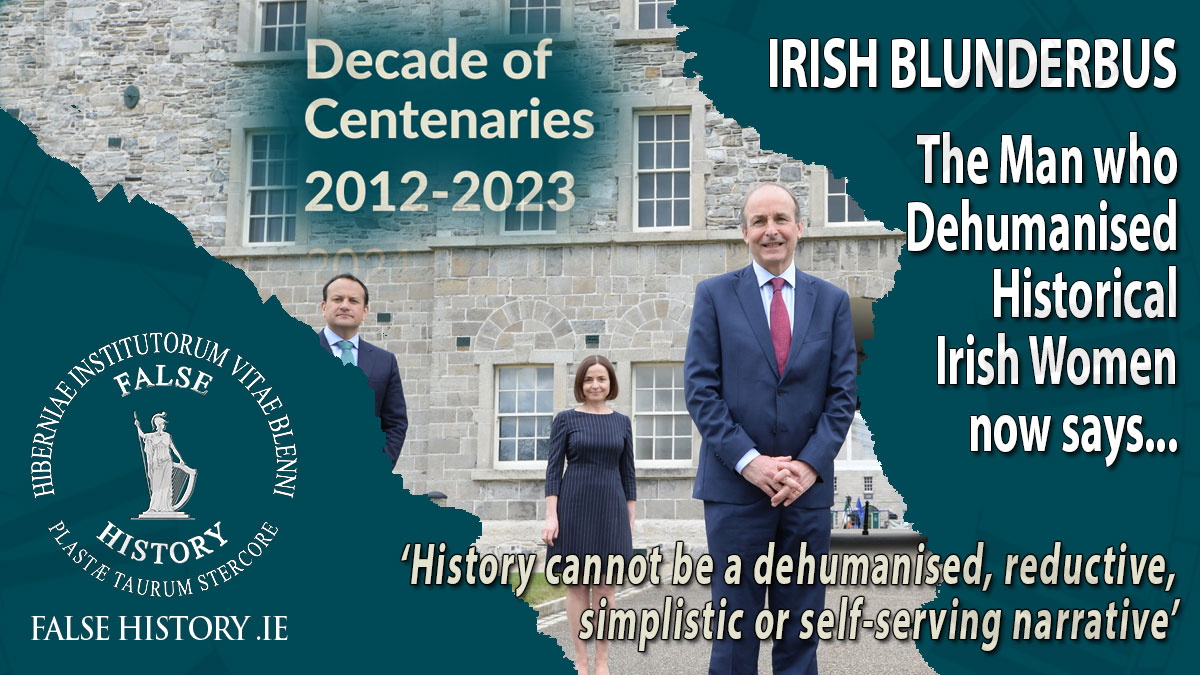 The gross hypocrisy of An Taoiseach Micheál Martin might not be immediately discernible from his the quote below, spoken at an event to launch the 2021 element of the Commemoration of the Centenaries, specifically those events which led to Irish independence.

Only a few short weeks ago, the Taoiseach used dehumanisation combined with a simplistic and self-serving historical narrative to castigate Irish women who managed institutions dedicated to the care of unmarried mothers and their children.

Micheál Martin is a former minister for health, thus a person who we would reasonably expect to have at least a basic knowledge of medical statistics and perhaps even an elementary understanding of pathology, aetiology and epidemiology, respectively the study of disease, disease causes, and disease spread.

The Irish government, in its infinite wisdom, chose to appoint a commission of investigation who had no knowledge of science or medicine, to enquire into a scandal, which is chiefly based on the issue of historical high mortality statistics.

The investigation stemmed from false charges that Irish women, during the 20th century, had starved babbies to death, first at the Protestant run Bethany Home and later to all catholic run homes.

Many Irish parliamentarians, eager to have their names entered on parliamentary record, for having the wit to able to see what others needed spearfishing goggles to see, brazenly stood up and declared to the world that ‘marasmus’ was a synonym of starvation.

The reductive insinuation was that these dehumanised Irish women were motivated by a hatred of illegitimate children and so took to offering to the nation a baby disposal service. One so called historian stated unequivocally that ‘the state and church colluded to get rid of an embarrassment to Catholic Ireland’, a false claim, used also to promote a self-serving narrative, based on one cherry-picked and misinterpreted political comment.

Micheál Martin stated in January 2021 that it was ‘deeply distressing to note’ that high infant mortality rates were known to the authorities, but they did nothing about it. He takes this information from the final report of the commission of investigation into mother and baby homes. This comment and finding are the result of a complete lack of knowledge of vintage medicine, aetiology and epidemiology and is based entirely on false assumptions.

It is particularly interesting as the Taoiseach’s comments were made during a tough national lock-down due to the coronavirus pandemic. The legislation which facilitated the lock-down is the seminal 1947 Health Act. One of the prime architects of this legislation was the government’s Chief Medical Advisor, Dr James Deeney. His book, ‘To Care and To Cure’, is essential reading and an authoritative source for the study of Irish medical history. The act combined with the Local Government (Sanitary Services) Act, 1948, mark a turning point in the history of Irish public health, recognising and tackling the causes of disease, and for the first time, they gave the authorities effective powers of enforcement. It is a reminder that the reduction in mortality rates which followed, would have been mostly ineffective if medial solutions alone were pursued.

Deeney records the extraordinary efforts made by many people and organisations to reduce infant mortality rates, often in very challenging circumstances, across every section of the population. Furthermore, the statistics continually revealed that the people most at risk were poor people and poor families. Many charities raised money to help these people, some were supported by local authorities who in turn worked to support poor people and poor families. Infant aid societies provided mothers with clean milk, clothing and other essentials. Mothers were taught good hygiene practices and encouraged to breastfeed their babies. It is beyond the scope of this article to go into more detail, save to say, that there is a whole genre of Irish history dedicated to the subject but was completely ignored by the commission and others.

The role of poverty in causing high infant mortality rates was well noted during the past, is still under study by science and continues to appear with regularity in today’s medical and scientific literature. The issue jumps out from the commission’s report, yet they manage to ignore it completely. An incompetence which points to the self-serving narrative of cultural bias and an exemplar of the Dunning Kruger effect. A cognitive bias where people are sure that wrong conclusions are correct, due to a lack of knowledge of alternative explanations.

The Irish nation should be deeply disappointed that a former minister of health, and a former history teacher, knows so little about health issues, historic or contemporary, as evinced through parroting, is now the leader of the nation.

Persons who proclaim that ‘history cannot be a dehumanised, reductive, simplistic or self-serving narrative’, should have the wit to understand the meaning of their utterances and demonstrate a capability to act in such a way.

Parroting the words of a scriptwriter will not lend to the utterer any credibility.

You can find out how and why the Irish dehumanised women and what caused politicians to write into the political record a reductive, simplistic and self-serving narrative in my new book.