A Debt of Gratitude Owed to Our Great Women 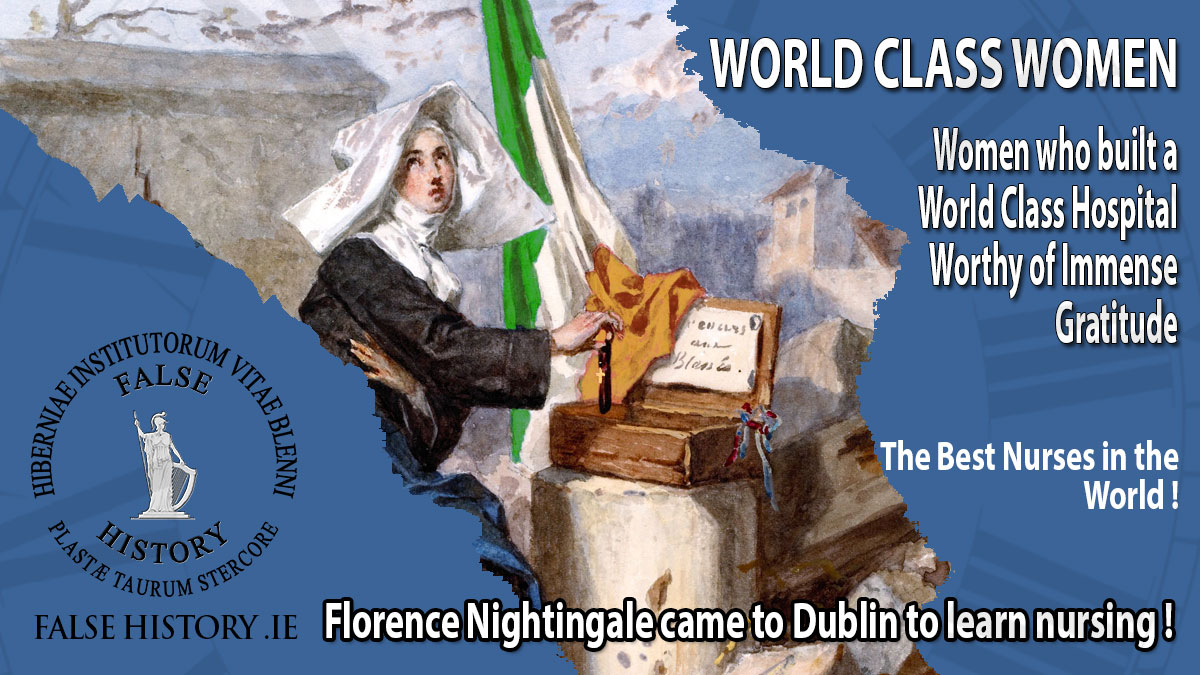 Florence Nightingale wanted to learn her nursing craft from the best nurses in the world, the nuns at St Vincent’s Hospital Dublin. Dubliners have enjoyed world-class healthcare provided by the Sisters of Charity, a remarkable achievement by a group of women, yet Irish feminists excoriate these great women.

Nightingale’s famous mission to the Crimea was the result of a report about the dirty, dingy, rat-infested hospital conditions suffered by British troops. The Times war correspondent William Howard Russell, an Irishman, reported on the well-organised services of the French Catholic military nurses, Russell asked rhetorically: “Why have we no sisters of charity?”[1]

The British are boastful in falsely claiming that Florence Nightingale invented the craft of modern nursing. She certainly revolutionised nursing in Britain and contributed to advancements in the field, but the British theft of history has obscured the real history and excluded those who might expose the braggarts of stolen history.

Florence Nightingale applied to work with the Irish Sisters of Charity twice, first in 1844 and again in 1852 when she visited Dublin only to find the hospital closed for renovations. The hospital was located on St Stephen’s Green at the former home of the Earl of Meath. It was purchased in 1834 on behalf of the Sisters of Charity, and they turned it into St Vincent’s Hospital. Later, adjacent properties were also purchased to expand the hospital.

The nursing mission to Crimea in 1854 was the result of the public outcry. In the aftermath of Russell’s report, the secretary for war, Sidney Herbert, turned to Nightingale for assistance. Florence was dispatched to Scutari with a contingent of nurses, 14 Anglican sisters, 14 lay nurses and 10 catholic nurses who were also nuns. An Irish sister, Mary Clare Moore was the Chief Executive Officer of the mission, she brought a level business head to counterbalance the more excitable Florence.

At the end of Florence’s mission, the British establishment sought to organise a big event to boastfully celebrate her achievements. To her great credit, she avoided the ruckus, and surreptitiously travelled back into England to avoid the self-aggrandising bluster of her country people dismissing it as, fuzz buzz.

Turning failure into triumph or more correctly creating such illusions is an existential imperative for the ongoing recruitment campaigns of a militaristic society, but the bluster did not go unnoticed. One American publication commenting on the hype of the era asked, “what has she done that thousands of Sisters of Charity have not been doing for the last hundred years?”[2]

Why has the massive contribution of the Sisters of Charity been written out of the history of Irish medicine? The Sisters have over near two centuries built a world-class hospital and provided the people of Dublin with free and affordable healthcare. Why are the Irish so ignorant, that instead of celebrating their magnificent altruism and thanking these great women — which would happen in any normal society — we have turned our back on them and pilloried the good sisters using a slew of falsehoods.

Feminists think that women have been written out of history — a false notion reliant on a lack of erudition — as is their failure to celebrate the achievements of women. Women who built a world-class hospital, worked for free and low wages, are to be commended and given an honoured place in history. This honour will likely be conferred upon great women by men, as Irish women are too busy creating delusions of abuse and misogyny to curry public sympathy and notoriety. It is a sad fact of life that Irish men will have to teach the feminists how to commemorate the achievements of women!