What the MABH Commission got wrong! 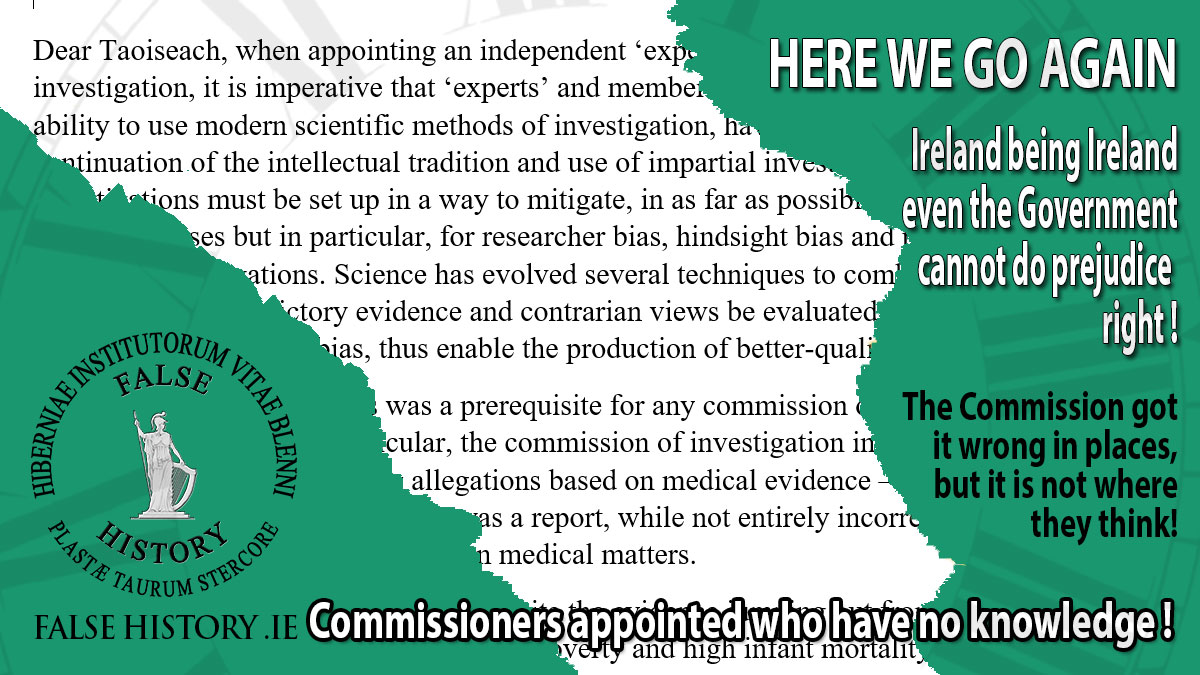 Dear Taoiseach, when appointing an independent ‘expert’ or new commission of investigation, it is imperative that ‘experts’ and members of the commission possess the ability to use modern scientific methods of investigation, have a strong commitment to the continuation of the intellectual tradition and use of impartial investigation techniques. All investigations must be set up in a way to mitigate, in as far as possible, all our natural cognitive biases but in particular, for researcher bias, hindsight bias and presentism in historical investigations. Science has evolved several techniques to combat bias, including a demand that contradictory evidence and contrarian views be evaluated, in order to limit the effects of confirmation bias, thus enable the production of better-quality reports.

The commission’s lack of basic mathematical/statistical knowledge also caused them to make one of the most basic errors in statistical interpretation. They proceeded to base many of their conclusions and speculations on the ‘false causes fallacy’. Every data scientist and statistician is taught — in their first week — that correlation cannot be used as evidence for a cause.

A correlation is simply a ‘co-relation’ between measurements that appear to increase or decrease at the same time, when one goes up/down, another goes up/down or when one goes up, the other goes down. For example, in warm countries, there is a strong correlation between the number of ice-cream sales and the number of admissions to hospital due to heatstroke. Heatstroke is not causing the increase in ice-cream sales, and neither is the increased volume of ice-cream sales driving the higher number of heatstroke victims. In the terminology of statistics, correlation does not imply causation. Accordingly, statisticians are taught to look for other variables/measurements which might be causing the correlation. In the case above, the hidden variable is hot weather.

The commission — unaware of procedures to be followed in basic statistical interpretation — imagined that there was a correlation between poor quality healthcare and high infant mortality rates. Despite having little or no figures for the healthcare side of the equation, the commission did — what anyone could do — use their imagination to fabricate assumptions to fill gaps in their knowledge.

Consequently, the commission has presented to the nation one of the most incompetent conclusions ever arrived at by a commission of investigation in the history of the State.

In Paragraph 12 of the executive summary, the commission pronounces and speculates:

In the years before 1960 mother and baby homes did not save the lives of ‘illegitimate’ children; in fact, they appear to have significantly reduced their prospects of survival.

There is absolutely no mention that these children were in a high-risk category and intuitions — even today — which deal with high-risk individuals, have higher mortality rates.

Higher Infant Mortality Rates — multiples of the national average — continue to exist in Ireland under your own leadership.

Using the same logic of the commission, we could state emphatically that the mere fact of children who were born to Traveller women seems ‘to have significantly reduced their prospects of survival’. Judge Catherine McGuinness of the Children’s Rights Alliance, tells us that the ‘infant mortality rates for Traveller children are 3.6 times that of the general population.’

In the interests of fairness and justice, the government must now appoint a commission of investigation to avoid any charges of bias for singling out the Christian community for castigation by a government suffering from a scurrilous lack of medical/scientific knowledge.

While you are at it Taoiseach, there are many more cases of high infant mortality rates which you might also want to investigate.

Children unfortunate enough to be born to women over 35 years of age seems to have ‘significantly reduced their prospects of survival’.

Would you believe the fact that children who are born to unmarried mothers in this day and age has ‘significantly reduced their prospects of survival’. The CSO has not yet measured child mortality rates for this cohort, but the Office for National Statistics has measured it in England and Wales. It found that children born to unmarried mothers suffer from a mortality rate forty per cent higher than those born to married parents.[2] Studies from Finland show similar results.[3]

Research in Ireland shows that babies born to mothers under 25 years of age suffer from a mortality rate twice for those born to mothers aged 25 to 29. Children born to women aged over forty also suffer from mortality rates twice that of the mid to late twenties cohort.[4] Can we infer, as the commission has done, that these ‘appalling’ rates are due to poor quality care, or should they have looked for other causes?

You cannot — in light of your comments — fail to launch an investigation or act upon these ‘distressing’ statistics, unless you want your inactions to be the subject of a criminal investigation in 35 years’ time and your name besmirched.

It is deeply distressing to note that the very high mortality rates were known to local and national authorities at the time and were recorded in official publications. However, there is little or no evidence of State intervention in response to these chilling statistics and deaths. In fact, a number of reports actually identifying the problems were not acted on. [5]

Lazy or incompetent reliance on imagined statistical correlation also forms the basis for your apology or more correctly, your attack on the Irish people. No national leader in history has attacked the entire population in the manner in which you have done. Yet you think that you can label all the people of the past as having ‘a completely warped attitude to sexuality and intimacy’ while holding ‘a perverse religious morality’ and that these labels do not apply to your mother and grandmother.

What is the point in naming Dublin Airport after Seán Lemass when you say that he, along with ‘the agencies of the State showed little or no interest in addressing these crimes’. You say crimes, but did you even bother to read the commission’s report or provide evidence for these alleged crimes.

As can be proved, beyond any reasonable doubt, poverty was the primary cause of high infant mortality rates, and that the issue was completely missed by the commission. Accordingly, all of their conclusions based on such rates are null and void.

While you repeated many of the falsehoods within the commission report, one, in particular, stands out. You went on Taoiseach to repeat another falsehood that illegitimacy was an ‘egregious breach of human rights’. William Duncan, — a human rights lawyer with little or no knowledge of history — went back 1,000 years to tell a lame story, scurrilously declaring a breach of human rights that continued for the duration of a full millennium. Rights that did not exist until very recently. That is not history, it is not even pseudo-history, nor indeed would it qualify as counterfactual history.

History is about what happened not what might have happened but most of all Duncan never once told us about the 2,000-year history of the church saving the lives of hundreds of thousands of unwanted and illegitimate children. He never told us that illegitimacy was designed to protect the inheritance of the children of the queen from potential claims from the children of the king’s concubines. Duncan, however, mentions an Irish bishops’ conference in 1974 which recommended that there should be no distinction between a legitimate and illegitimate child before the civil law, evincing that the discrimination had a mainly secular basis. However, the thrust of his contribution continues to blame the church entirely for its instigation and continuance. It was in fact English ‘common law’ which imposed the ‘abuses of human rights’. Common law strongly supported the primogenitor system and was stringent in order to protect large blocks of property and power, from division and weakness through partible inheritance. Canon law was much more lenient in comparison and even allowed for the subsequent legitimisation of births.

Confirming one’s own biases is common throughout the authorship of the report and is evident in quite a few of the witness statements too.

The commission points out:

A number of witnesses gave evidence that was clearly incorrect. This contamination probably occurred because of meetings with other residents and inaccurate media coverage.[6]

Judge Harding Clarke had the luxury of access to impartial evidence, which when used, showed that one third of the women claimants, who applied for compensation to the symphysiotomy ex-gratia payments scheme, were fraudulent. These women never had the operation and X-Rays were used to prove it.[7]

Many of the witness testimonies supplied to the commission of investigation into mother and baby homes stretches credulity to levels that would not be tolerated by any sensible person or administration. Yet many Irish politicians were forthright in claiming that children were starved to death at the Protestant run Bethany home, before going on to include all catholic run institutions, The politicians — speaking on parliamentary record — included:

All of these politicians, and more, relied on the use of the medical term ‘marasmus’ on death certificates. Yet — this is important — infants and children died of marasmus at every Irish maternity hospital. Why were they not subjected to a commission of investigation? The answer is ignorance and prejudice. The commission has also rubbished such claims but has any one of these politicians come out in public and admitted to making a mistake? I surmise their reluctance is reflective of the era we live in.

There is no doubt that we are living through a time of mass hysteria and that the truth has been its first victim. I have no business defending the Catholic church or even the Anglican church. They can defend themselves. I cannot stand back, and watch lies and injustice flourish in a nation that has no regard for competent investigative methods including the use of the scientific method where appropriate.

All of Europe knows that our education system is bad and that it has been in steady decline for decades. This entire scandal is based entirely on bad education which in turn allowed our cultural prejudice of self-loathing to run riot.

Ask yourself one question, why is it that the organisation which fought for the rights of unwanted children not to be killed, throughout two millennia, — and in the absence of action by the secular authorities — took practical steps to provide lifesaving care, education and establishment in employment for unwanted children, should now stand accused of operating a baby-killing and disposal service.

There is something very rotten in Irish education, I wonder will you be the leader who begins to stop the rot or will it be left to someone else, further down the line. If you are going to appoint an expert to review witness’ testimony you need someone — like the Garda commissioner — from outside the state. We certainly have no one with the relevant expertise within the Irish university system.

Without the right people in place, with the right expertise, the taxpayers and citizens of the nation will be forced to pay for the Disneyland thrills of highly paid investigators going round and round on their merry-go-round. Without leadership and competent impartial investigators the country will be stuck for decades in the home of Mickey Mouse.

[3] Remes, Martikainen, and Valkonen, ‘The Effects of Family Type on Child Mortality’.