Child killers get a belt of a Crosier! 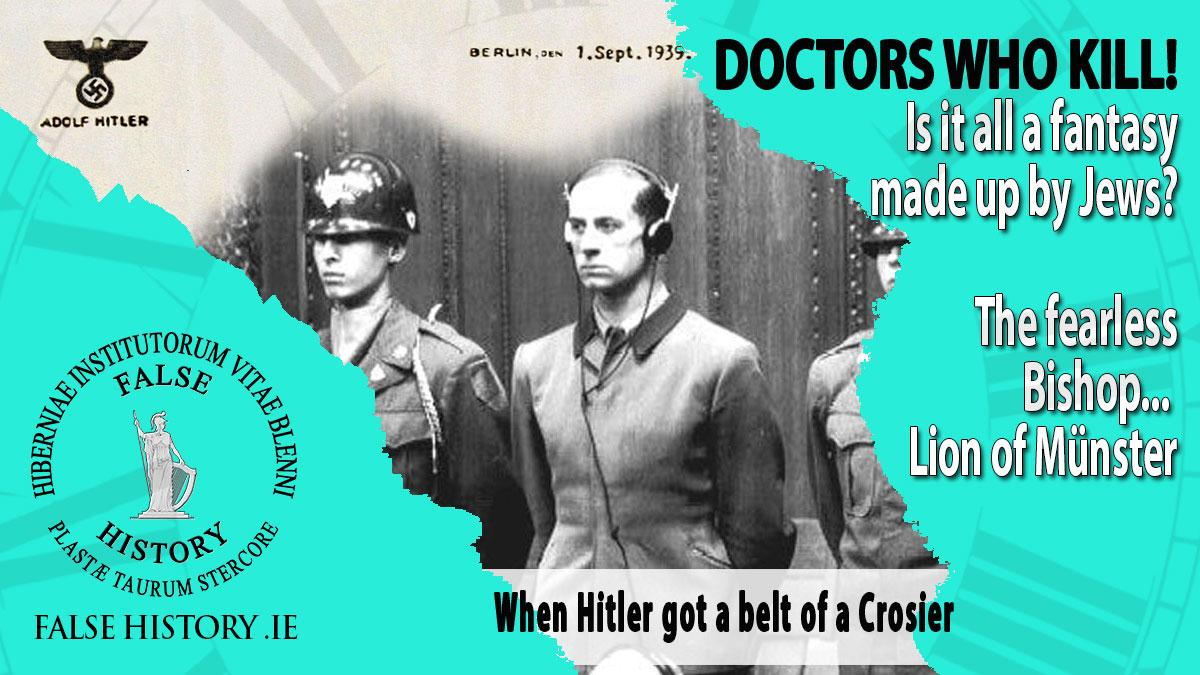 History is always great craic as there are many people who have their own version of it and swear their version is true, despite contraindicatory evidence. I told a story during a recent interview in relation to the false claims made by Catherine Corless and others that children were starved to death by the women who ran and managed the Tuam Children’s Home. My story was to contrast the true story of children who were killed off by medical doctors with the approval of their government.

I used the term Prime Minister to throw people off the scent until the punchline could be delivered. It was of course the German Chancellor, Herr Hitler. His doctor, in this story was Karl Brandt who was one of seven doctors executed for crimes against humanity, after they were found guilty at the Nuremburg trials. The ‘euthanasia’ programme was code named Aktion T4 named for the Chancellery offices that directed it from the Berlin address Tiergartenstrasse 4.

Well, the next day I received a message from a man telling me that the whole story was untrue, that I was not much of a historian and that I should not be trusting history written by Jewish authors and…

As to those convicted at Nuremberg, you as an historian SHOULD know that those trials were a travesty of justice. No German was ever allowed to refute any allegation to the ludicrous assertions made by the prosecutors.

Thus The Nuremberg Trials are no yardstick to judge any German by at that time. As an historian I would have thought you would know this but likely like most “historians” when it comes to World War 2, you have a blinkered approach and simply repeat what the victors of that terrible war say.

According to you Herr Hitler gave permission for such a program. Since you call yourself an historian and have therefore presumably thoroughly researched this incident, I have a few questions for you:

I am reminded of the old joke where the Japanese officer in charge of a POW camp authorised the British officers to select three men at random who would be freed in exchanged for Japanese POWs. Three men were selected by lottery, with the proviso that each man had to answer a single quiz question correctly but if he failed to answer correctly, he would be passed over and the chance would go to the next man in line. The first man up was an English man. The officer asked what was the name of a famous ship which sank in 1919. The Titanic Sir. Correct. The second man up was Scottish, and his question was, how many people died on the Titanic. 1,513 people died Sir. Correct. Next up was an Irish man. The officer asked him to name all those who died.

The Titanic is a good case in point as the number of people who died is an estimate, not the actual figure because it remains unknown. That’s history for you, all of the documents needed for total accuracy are seldom if ever available. So does that mean that the Titanic never sank, or that we can state that nobody died, or that the estimates are inaccurate! Even if all the documents were available there would still be a discussion surrounding their accuracy because all records contain mistakes.

I responded to my challenger sending him a copy of the letter of authorisation, signed by Hitler himself, written on official notepaper and dated 1 September 1939. Obviously, the text is in German but the letter itself is widely available on the internet along with a translation into several languages. I also gave him the name of the child, Gerhard Kretschmar. The name of his mother is quite obviously Frau Kretschmar, but I had anticipated that it would be not good enough for my intrepid challenger. It was of course a test of his ability and inclination as her first name, along with the name of his father is also widely available on the internet and is easily findable by anyone with the most basic of historical skills. That is indicative of a great problem with history, people can develop strong opinions and yet not be able to find basic evidence to support or disconfirm their opinions. Moreover, when such skills are lacking, people begin to make assumptions, just like Catherine Corless, so that when assumptions go unchallenged, a full-blown conspiracy theory appears and grows fatter with every retelling of the story.

So, can historians write off all the evidence presented at the Nuremburg Trials because some people regard it as a ‘travesty of justice’? Are the present-day memorials at the site of Tiergartenstraße 4 and elsewhere just figments of the imagination, particularly the Jewish imagination?

In my second reply, I sent my challenger a photo of the Aktion T4 monument in Berlin to which he responded with this comment about another memorial in Berlin, the Holocaust Memorial:

It is a grotesque collection of concrete blokes to do with the “holocaust” – an alleged event for which there is not one shred of actual evidence to prove any deliberate attempt was made by Germany to murder millions of Jews or homosexuals or gypsies.

If you are beginning to think this guy is a Neo Nazi, then I think his other comments would bolster this view.

Just to get you started Herr Hitler himself volunteered to fight in the trenches of WW1 in which he spent four years during which he was highly decorated on ma[n]y occasions for his bravery. Another little nugget would be for you to consider the number of peace attempts made by Herr Hitler in the 1930’s in an attempt to avoid war. Another might be the Bromberg massacres. I could go on but you get the idea I’m sure.

He is right here; Hitler was decorated during the first world war receiving the Iron Cross First Class and Second Class. The problem is that getting at the truth of Hitler’s story is made almost impossible by the popular view of him as the evilest man in history.

I have been to Germany many times and I have visited many historic sites including the House of the Wannsee Conference, now a museum commemorating the notorious Wannsee Conference of 20 January 1942. It was at this meeting that the ‘final solution of the Jewish question’ was coordinated and implemented. What struck me most, apart from the callousness of the individuals involved, who had no difficulty in advocating for the industrialised destruction of millions of human beings, was that of the fifteen people present, eight of them held academic doctorates. Academia has a lot of blood on its hands but has gotten away with it, at least as far as official history is concerned. Maybe it is because nowadays, it is the academics who write all the history.

The official history of both world wars is not a totally accurate account of the events which took place. Official history, that which appears in schoolbooks, is written by the victor and such histories are written as a justification and vindication of their actions combined with a vilification of the vanquished. Among the many problems with victorious histories is that they leave many unanswered questions, often defy logic and give off a whiff of dishonesty which leaves much room for suspicions to be germinated and grown. Suspicions themselves can create all sorts of alternative histories, ranging from plausible to the downright daft.

So as a historian my job is not to tell my audience how or what to think. I always advocate that when historians are writing for a general audience, they provide the available evidence, explain it as impartially as possible and let their audience make up their own mind.

Accordingly, I present some of the evidence here for the existence of the Aktion T4 programme which you can use alongside your own research to decide if it the programme ever existed. I will also leave the comments open at the bottom for you to present arguments for and against. However, the denial of the Holocaust is a no-go area and comments in support of such nonsense will be filtered out. 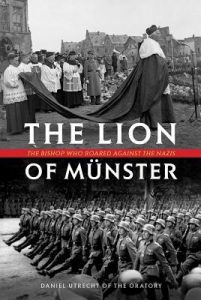 The Lion of Münster

If anyone was killing children in Ireland, they would have gotten a belt of a Catholic crozier, just like Adolf Hitler. Clemens August Graf von Galen was the great man who stood up to Hitler. The Nazis planned on killing him after they had won the war. Get the full story from these links…

The Lion of Münster: The Bishop Who Roared Against The Nazis

Hitler authorises Bouhler and Dr Karl Brandt to start killing off disabled people. The document was written in October 1939 and backdated to the first of September, perhaps to cover Brandt who started his killings before he had legal cover from the Chancellor.

In English: “Reichsleiter Bouhler and Dr. med. Brandt are assigned the responsibility for expanding the powers of specific doctors so that, where according to human judgment patients are incurably ill, they may be granted euthanasia following a critical assessment of their state of illness. – A. Hitler

The handwritten comment reads: “Von Bouhler mir übergeben am 27.8.40 – Dr. Gürtner” (English: “given to me by Bouhler on 27.8. [August] [19]40; Dr. Gürtner”). Franz Gürtner was Minister for Justice (Reichsjustizminister) from 1932 to his death in 1941. Philipp Bouhler was an SS-Obergruppenführer and leader of Hitler’s Chancellery (Kanzlei des Führers; KdF).

The parents of Gerhard Kretschmar were named Lina and Richard.