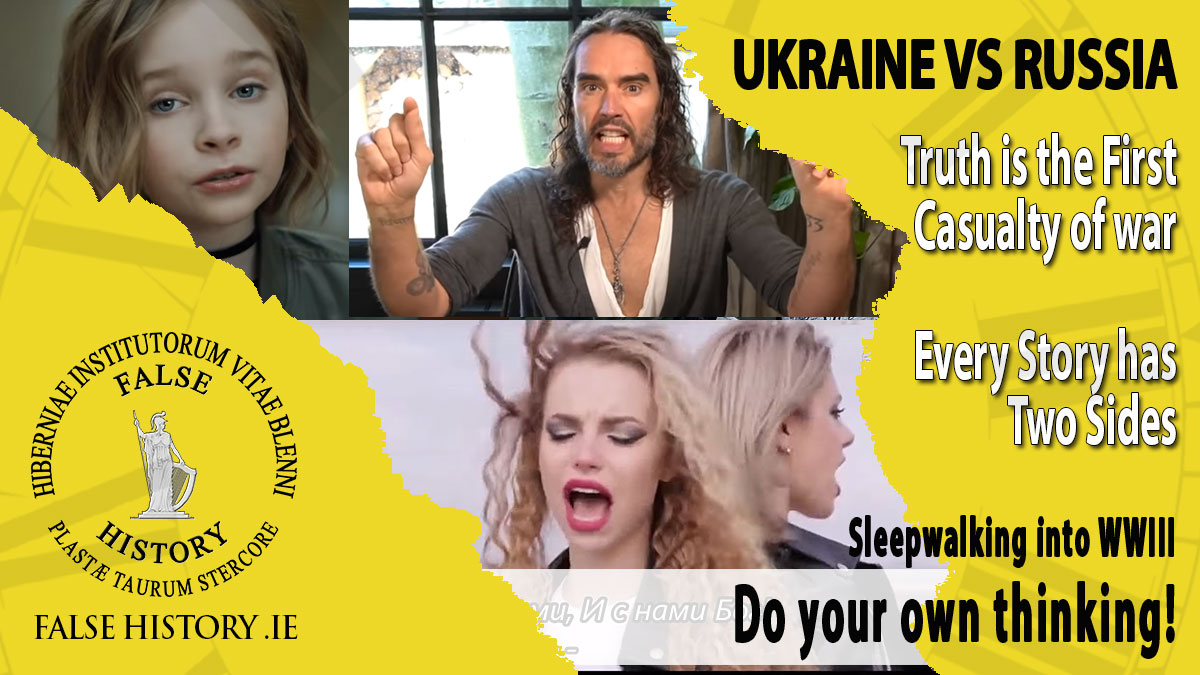 Since the war began in Ukraine, Ireland’s state broadcaster has begun nearly every one of its news bulletins with the gospel according to Zelenskyy. The Irish people, along with the people in most western countries, have been given a blinkered view of events and their causes, not because they cannot be trusted to do any thinking of their own, but mainly because of journalistic ineptitude. RTÉ journalists are not clever enough to be able to manipulate people’s opinions, rather they just freewheel along with popular notions, collecting a pay cheque each time they pass go. Real journalism has left Ireland a long time ago, but other countries still have people willing to stand up for the truth. The truth does not turn Vladimir Putin from ‘an evil dictator’ into a liberator, nor Zelenskyy from a comedian into a clown, as the truth is on no one’s side but its own.

If you are interested in finding the truth, then I propose you ponder these three videos. The first is a song by Vika Starikova, a nine-year-old Russian girl, from 2019, with 132 million views on YouTube!  The video tells starts off with the view common in Russia that the nations of the world are ignoring her, and a child’s three wishes awakens them. It’s a belter of a song, even if you don’t speak Russian.

The second video is also a song by Natalya Kachura & Margarita Lisovina designed to rouse support for the cause of Donbass and praising Russia for its support. The video was shot at two Ukrainian Soviet war memorials. The first is ‘the Monument to the Liberators of Donbass’, the second is the ‘Savur-Mohyla memorial’, which was destroyed by the Ukrainian army during fighting with Russian separatists in 2014. The destruction of memorials in former Soviet Republics, especially those dedicated to the millions of people who died fighting the Nazis, is a particular emotive issue for Russians. So strong is the insult to the fallen felt, that the producers of this song have used it to rouse support. Also, unlike the Soviet soldiers who fought as atheists, often forced atheists, take note, God has made a big comeback in Russia.

The third video is by Russell Brand, railing against the lies and inventions pedalled out daily by the western media. He is always entertaining and has a quite interesting take on the cause of the current conflict.

As we all know, the truth is the first casualty of war, but while she is impossible to kill, she can be gagged and silenced. We can however hear her mumbles if we seek out the other side of the story. Every story, we are told has at least two sides and so one-sided stories should always arouse your suspicion.

Btw, I am struck with the number of parallels between Irish history and the history of former soviet republics. Post-independence Ireland had to deal with its own separatist region and had military bases belonging to the former colonial power. We blew up one or two colonial monuments like Nelson’s pillar in Dublin. Three years after Nelson went up, the separatists travelled from their region, to blow up the O’Connell monument and the Wolf Tone monument at Bodenstown and threw in the RTÉ TV studios for good measure!

I surmise that there is at least one big difference, Nelson, O’Connell and Tone had all faded from memory while monuments to the élite are less valued by the people than monuments dedicated to their recent ancestors and relations.