Dumped in a septic tank! 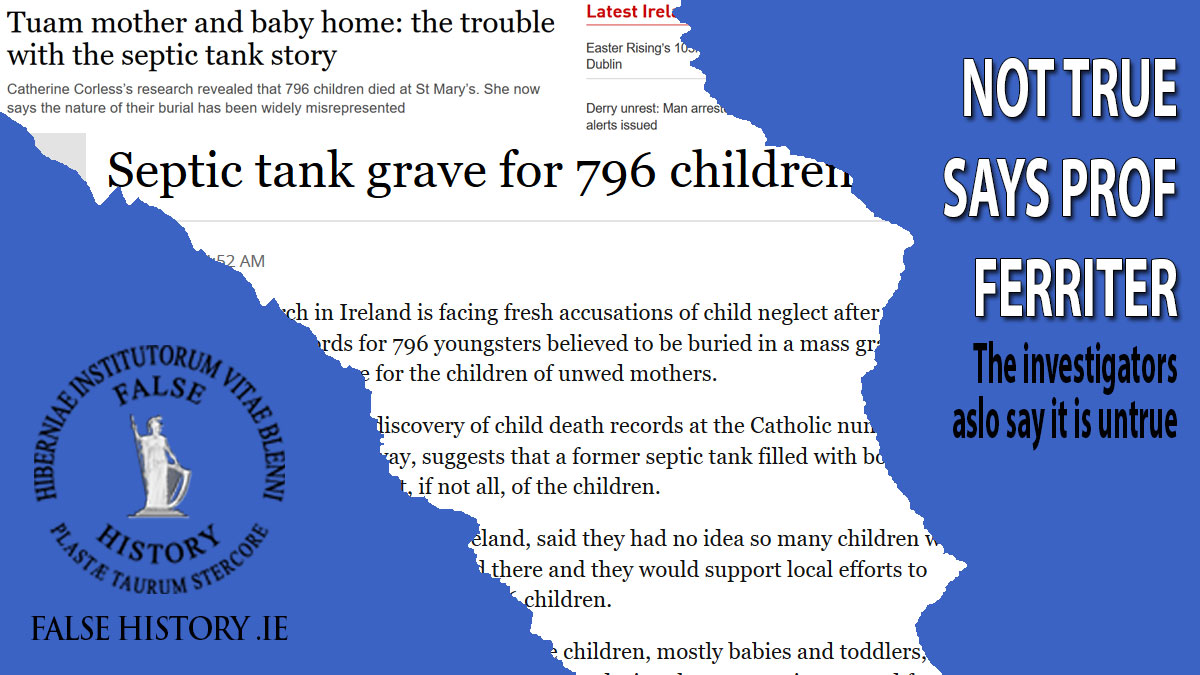 ‘This erroneous assertion that 800 bodies were dumped in a septic tank. That is not true’.
Prof Diarmaid Ferriter – van der Horst interview 2014

The fifth interim report (15th March 2019) the Commission of Investigation into Mother and Baby Homes states:

In the light of a great deal of inaccurate commentary about the Tuam site, the Commission considers it important to emphasise what it has established and what it has not established.

The human remains found by the Commission are not in a sewage tank but in a second structure with 20 chambers which was built within the decommissioned large sewage tank.

‘Tell us the truth about the children dumped in Galway’s mass graves’ – The Guardian. (British daily newspaper)

The originator of the septic tank story is reported to have said in 2014: ‘I never used that word ‘dumped’,’ Catherine Corless, […] ‘I never said to anyone that 800 bodies were dumped in a septic tank. That did not come from me at any point. They are not my words.

In 2019 on her Facebook page Catherine Corless stated the following:

This is what the Archaeologists found when they first excavated the Tuam Home babies sewage site: two inlet sewage pipes which facilitated the flow of sewage into the chambers where the babies remains were discovered. which caused some little remains to be forced against the wall of the chambers and to date one little digit was found compacted in the wall. I do not mean to disturb anyone, but I am only quoting from the Commission of Inquiry’s 5th Interim Report on the Tuam site, and I include a photo of the sewage inlet pipes taken by the Archaeologists, and add (for the non believers) that neither Catacombs or an Ossuary would need sewage inlet pipes! Yet, not a stir from the Religious or the Church, the State at least are doing their best.
SEWAGE INLET PIPES:

Low and behold, I think enthusiasm got the better of her as the pipes in the photo are of a separate structure and are not of the “chambers where the babies remains were discovered”. The Commission of Investigation report refers to this structure as ‘Feature 2’. The burial chambers are referred to as ‘Feature 1’.  The flow of sewage which forced some little remains against the wall is not mentioned in the report either. There was no impact, the bone in question, a small hand phalanx, floated gently above the level of the remains due to an influx of ground water, a common occurrence in chambered underground burials, where it became lodged in a crevice. (see Chapter 8, Paragraph 122 – Water influx)