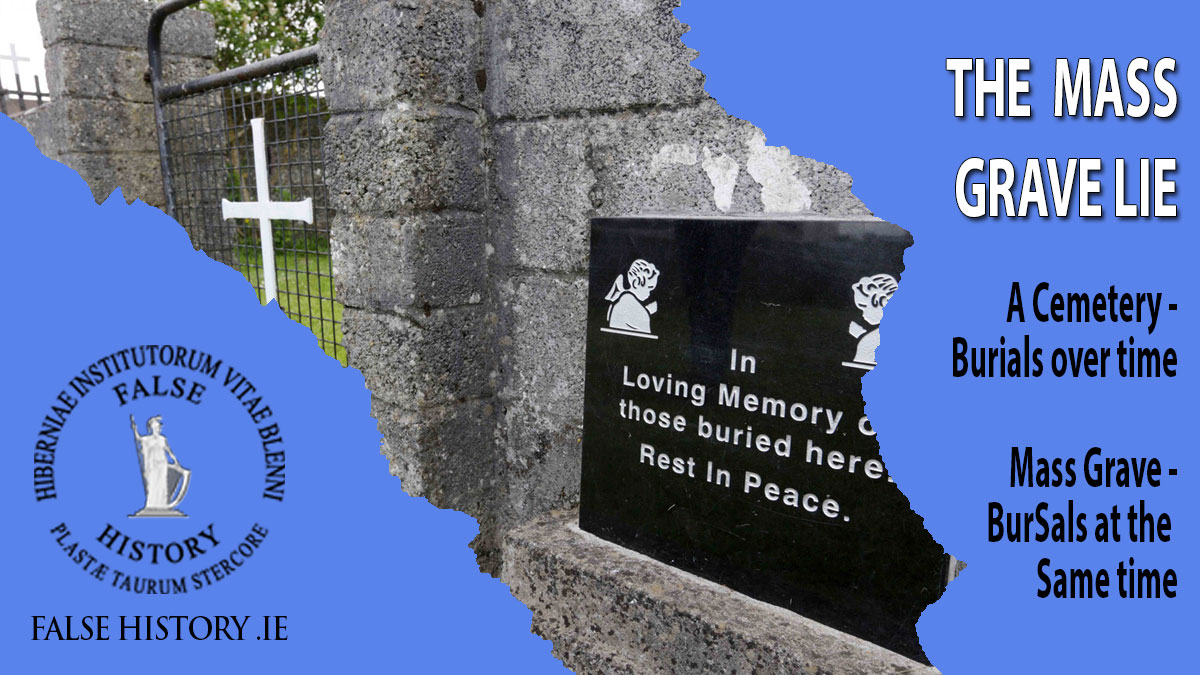 Would you consider your local cemetery to be a mass grave, perhaps an old burial ground with no headstones or grave markers? The term mass grave is used to imply a criminal act, but mass graves have a short time component. A criminal mass grave is defined by the United Nations as a burial site containing three or more victims of execution. Mass graves are used in times of natural disasters, war, disease epidemics when many corpses are buried together; in peacetime, the motivation is often for reasons of sanitation. Mass graves also have been used to cover up crimes, but a key feature of such graves is that a number of burials have to take place over a short period of time. A place where burials take place over a long period is called a cemetery. The children’s burial ground in Tuam was not unmarked nor is it a mass grave, it is a children’s cemetery. The term ‘mass grave’ is used fallaciously and is, therefore, a significant constituent of a much bigger lie.

Recently, the same lie has been used in Canada following the discovery of forgotten burial plots at former residential schools. They are not mass graves, and the similarity of the excitable claims to those made in Ireland is striking.

Sensationalism triumphs over reason because of political obscurantism and supremacism, i.e. the same psychological deficit which is gratified through racism, sectarianism and the full gamut of prejudices directed at cohorts and individuals.

Without competent leadership, crackpot notions masquerade as fact ahead of the facts being obtained. The damage is always far more widespread than envisioned and causes self-inflicted wounds.  The Canadian government is entirely responsible for the establishment of schools to re-educate the indigenous peoples in the ways of their colonisers. The WASP (White Anglo-Saxon Protestant) governments have a long track record of abuse and mass murder. When the dust settles, Canada will have exposed its true history and will have brought much shame on itself, and particularly on its WASPish elite.