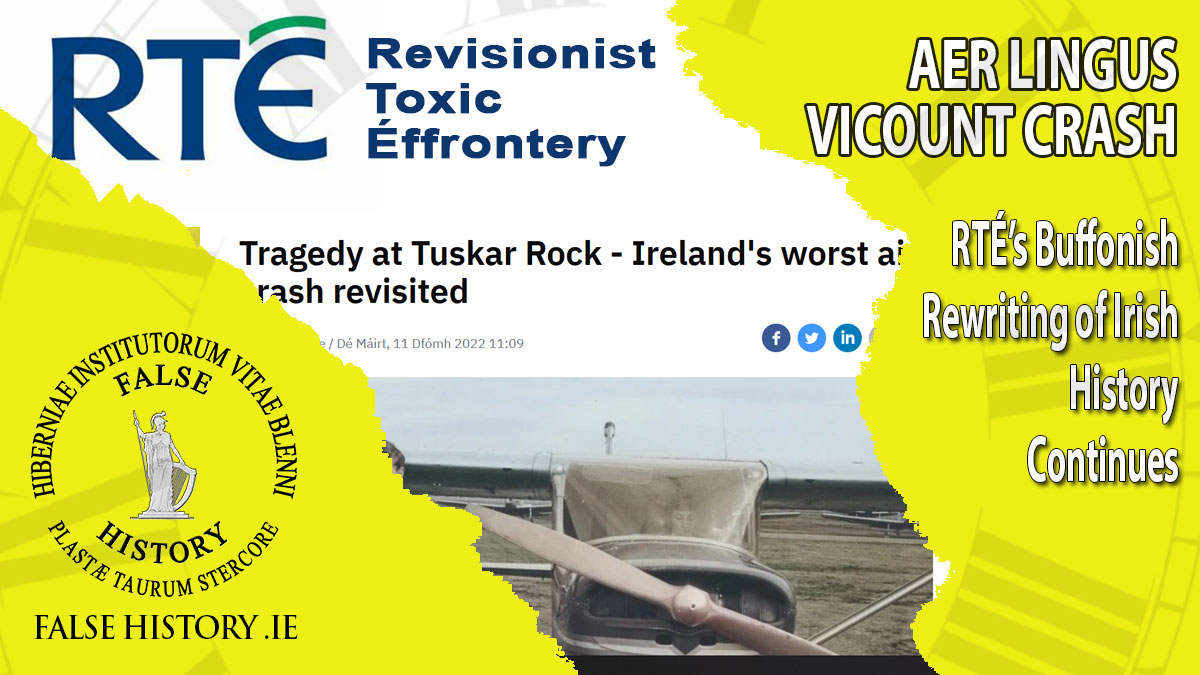 Brains are not only in very short supply at the state broadcaster, it is highly doubtful that they have even two brain cells to rub together between them all. Last night, it aired a documentary on the subject of the crash of on Aer Lingus airliner in 1968, and the mystery that still surrounds its causes to this very day. The programme was as far from an erudite attempt to solve the mystery, and so they chose to cause a bit of excitement by interviewing conspiracy theorists and let their ravings go unchecked. I’m afraid I could not take it any more after one particular barstool bore, stated that the air accident report was not alone quite short but was full of technical detail. He barrelled out that “61 people fell out of the sky and nobody gave a shit”. At that point I could not take any more and went in search of something else to watch. Luckily, I found Dr Pixie McKenna on an English TV station who had gathered a group of women in a launderette to examine and smell various types of vaginal discharges. It turned out to be infinitely more educational than any of the historical effrontery emitted from Dublin.

I qualified as a pilot many years ago in pursuit of a childhood dream, and have a lifelong interest in all matters connected with aviation. Over the course of my lifetime, I have read many aviation accident reports, including the one on this accident, sometimes labelled the Tusker Rock crash. I can confirm that every single aviation crash investigation report from Ireland or elsewhere is full of technical details. If “nobody gave a shit”, there would have been no investigation, no accident report and no reinvestigations. Like that of an international investigative team who re-examined all the evidence and published their report as recently as November 2000.

The barstool bore also claimed that the report was deficient because it was too short. In reality, the original report, published in 1970, contains all the details one would expect to find in such a report. The reinvestigation by the international team found that there were some errors in the 1970 report. However, these errors, if they were corrected, could not solve the mystery of the causes of the crash.

It has long been speculated that the aircraft was brought down by either a British missile or a drone. This has been definitively ruled out. The likely cause of the crash was a loss of function to the control surfaces on the aircraft’s tail. The Viscount aircraft had strayed off its planned flight path, most likely indicating that the crew were battling for half an hour to regain some control of the aircraft. Regaining control was impossible, and so the aircraft crashed.

The failure could have been due to many reasons including a bird strike, a structural failure, a door falling off, and so on. However, the engineering maintenance procedures at Aer Lingus were also found to be deficient, and so these remain as a likely possibility of being a major contributory factor.

However, nobody can know for sure what caused the crash, as the evidence to reach a reasonably certain conclusion has not yet been found. A more competent documentary maker would have hired a team to search the seabed for new evidence. It would have made a watchable and more interesting programme, even if no new definitive evidence was found. However, RTÉ, the cash strapped broadcaster, could not afford to do a real investigation and so chose the cheaper gutter journalism option, warming up old conspiracy theories using musings of Ireland’s over supply of barstool experts.