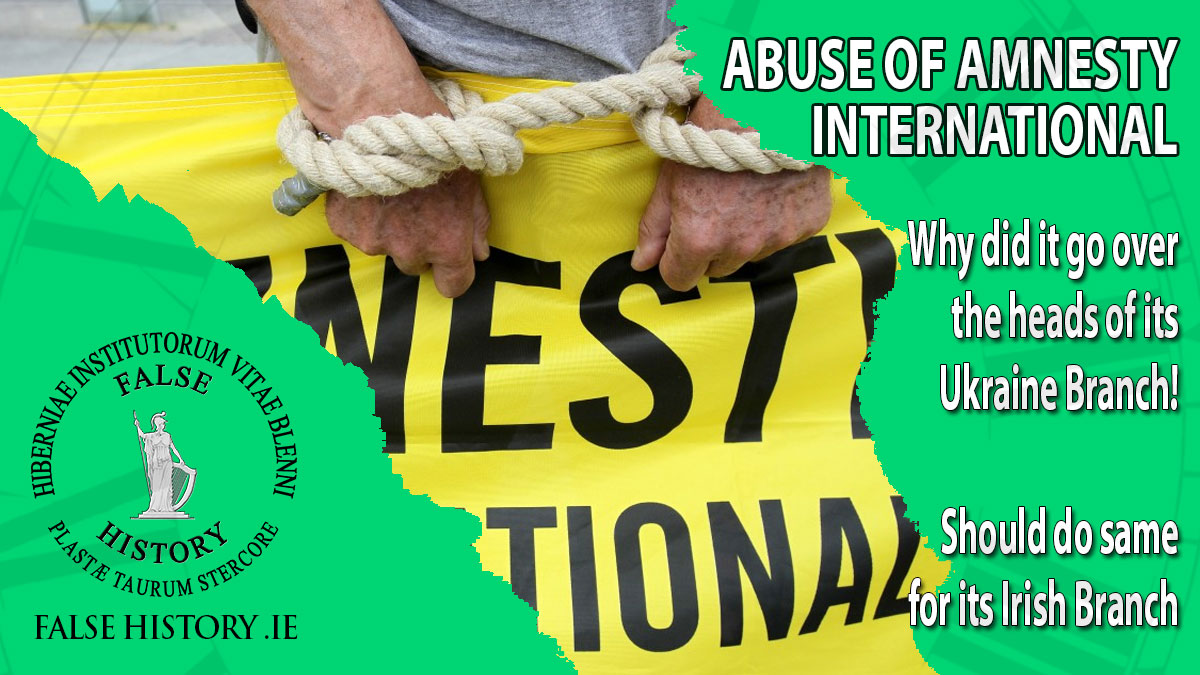 The abuse of Amnesty International in the wake of its report examining the misbehaviour of the Ukrainian military, exposes the ineptitude of the western media to report about war with honestly.

Students of military history and history in general are taught to be sceptical of claims and accusations made by all sides of belligerent divide in war. The truth is the first casualty of war and the search for it, in its hospital bed, is always fraught with difficulty. The western media has not even bothered to go in search of the truth, relying on Ukraine’s President Zelenskyy to form their opinion for them. Conversely, expressing opinions based on evidence will be met with a torrent of abuse, not only from Zelenskyy himself but from all the cheerleaders of war.

Zelenskyy has not been honest with the public. One could argue that no leader in history has ever valued honesty above the need to rally support and to make their people fight. Accordingly, impartial reporters will not take the information from either side in a war without subjecting it to critical analysis and seeking confirming evidence. That is not happening in the western media, and the information coming from western governments is managed in a way not to damage support for Ukraine.

The Ukraine military has been involved in false flag operations since the start of the war, however despite such tactics being a common propagandistic tool, it took Amnesty International six months to cop-on to what was happening. The Ukrainians have been putting the lives of their own civilians in danger, using them as human shields and by making civilian infrastructure look like military installations to draw enemy fire. When the enemy eventually attacks, the Ukrainians claim it as a war crime and use it to feed their propaganda machine. It also appears that the Ukrainian military are willing to carry out attacks with little care for the lives of their own citizens unfortunate to be in the line of fire. The attic is to lay the blame for all civilian deaths on the enemy.

It is obvious to any competent war observer that false flag operations have been in use since the very start of the conflict by the Ukrainian side. I wrote about this last April. Thankfully, my opinion does not carry the same weight as that of Amnesty International, and it did not enrage the Ukrainian establishment as much as they did.

However, despite Ukrainian government claims, nothing in the Amnesty report justifies the actions of Russia, even if it confirms that at least some Russian claims are true.

What’s truly astonishing is not the fact that some vested interests within Amnesty International tried to have the report stopped or watered down, it was their attempt to cast aside any semblance of impartiality, thereby confirming bias within the organisation. The Ukraine office of Amnesty International in particular has questions to answer after it tried to stop the publication of the report, which was compiled by foreign observers, without any assistance from local staff. This may account for why Amnesty International was so slow to observe and report from the war impartially in the first place.

However, Amnesty International is standing over their report, and we might be impressed that the organisation had the good sense to suspect the local office was filtering out information and decided to send in an independent team to check facts independently.

That said, the Irish office of Amnesty International is still a biased gobshite organisation and the parent organisation should also send in a team to investigate its crackpot behaviour.

Finally, the Irish Times continues to wallow in the gutter, telling readers that the “report by human-rights body gave Russia a blank cheque to continue trying to justify atrocities committed in Ukraine”. It’s titling pornography, not impartial reporting, and it is puerile in the expectation that its readers are so gullible.