Women in the Home – Feminist Lie 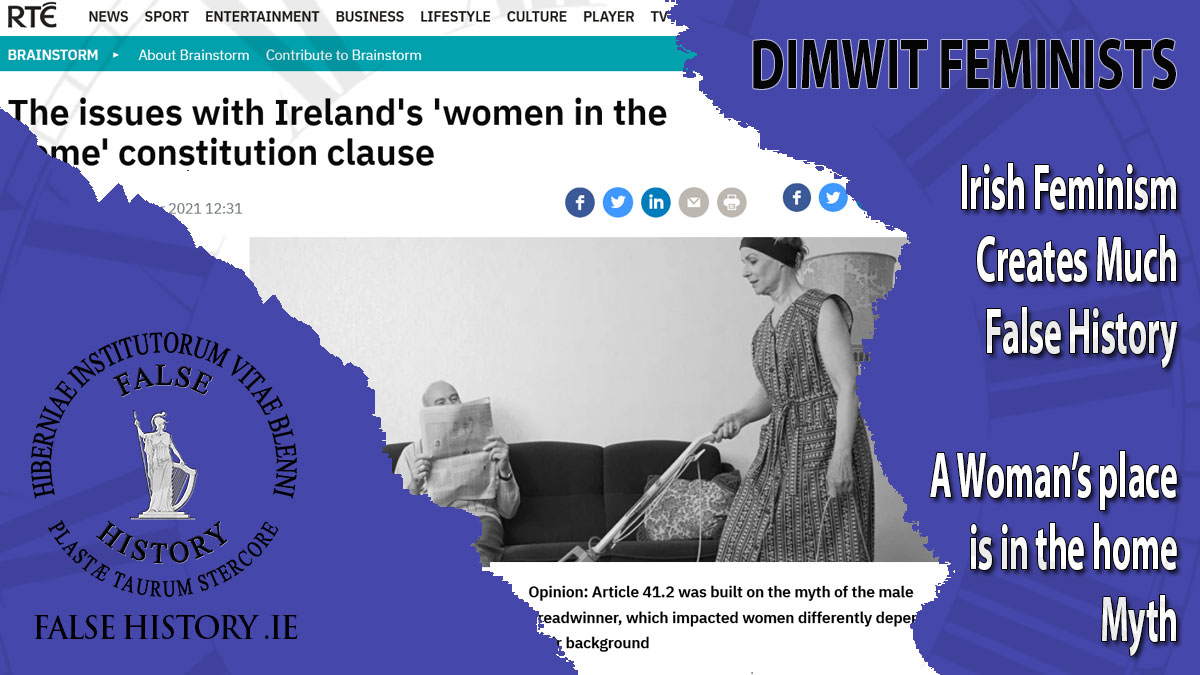 Many Irish feminists, particularly those of the crackpot variety, are not very bright and do not possess the ability to read and comprehend plain English or indeed Irish. They have, for decades, been promoting the lie that the Irish constitution stipulates that a woman’s place is in the home. In other words, all women are given the role of home-makers and should be frowned upon for taking up a career. However, that is not what is written in the constitution! Moreover, the protection it should give to women who want to stay at home has never been afforded to women by the Irish government.

Many couples today have been forced into debt slavery due to astronomical house prices and accommodation rental. The result for most people in Ireland is that it takes two incomes to get a mortgage and to service it for three or more decades.

Article 41.2 foresaw this situation and stipulated that the government should make provision for mothers who wanted to stay at home and look after their children. In other words, such women should not be forced out of the home to take up work through economic necessity.

Fast-forward 50 years when the rumour began to spread that the Irish government wanted to suppress women and had even enshrined in law that ‘a woman’s place is in the home’. It’s pure crackpot stuff, the love child of the Irish culture of self-loathing and catastrophising females.

Take the opinion of Heather Laird and Emma Penney as a prime example. Both women associated are with University College Cork, who declare that “Article 41.2 was built on the myth of the male breadwinner, which impacted women differently depending on their background […] suggesting that women do not require the same freedom of choice as their male counterparts.”

Laird and Penney’s interpretation of this article requires reading into the article text, which is simply not there. It takes a massive stretch of the imagination to see this as restricting the freedom of choice of women. Moreover, it shows that reason and logic have deserted the Irish universities.

Ireland’s state broadcaster RTÉ gives over part of its website to academics in a section named Brainstorm. However, much of the history on this part of the website is of similar quality to this particular article, and so the site would be more correctly named Brown Stuff Storm!