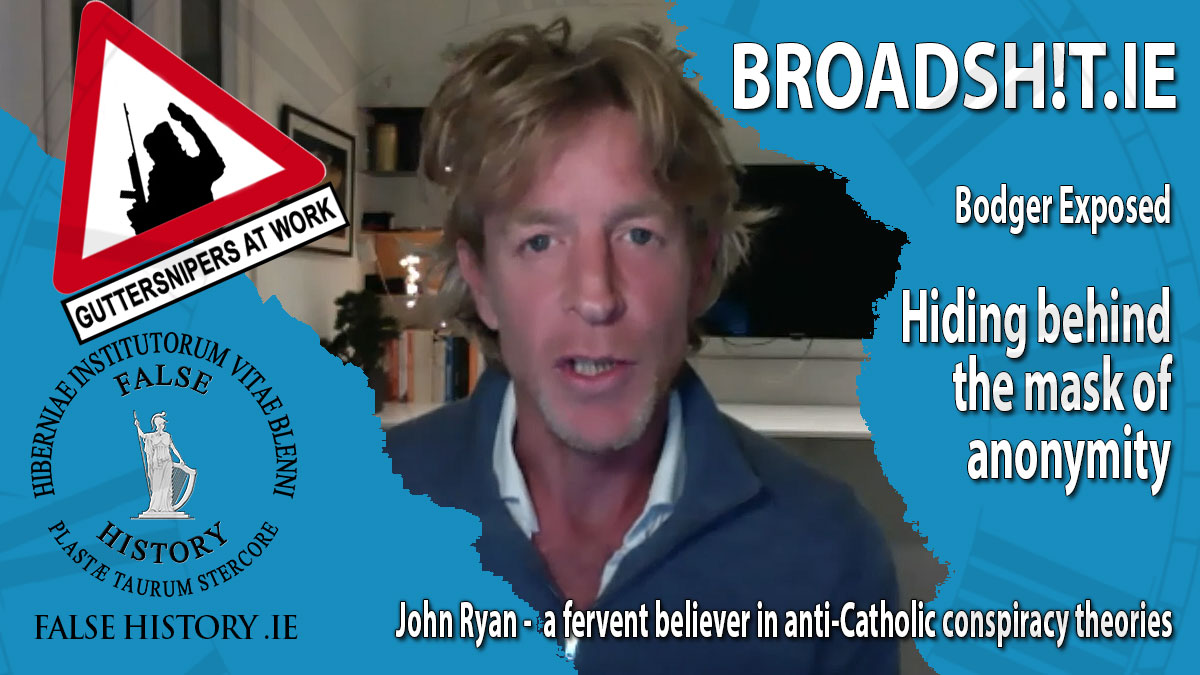 Broadsheet.ie is a guttersnipe website which gives vent to a certain type of Irish prejudices and bias. There is no editorial control and so the contributors are free to express any kind of drivel so long as it supports a particular narrative.

Bodger, whose real name is John Ryan, is a fervent believer in anti-Catholic conspiracy theories and is therefore inclined to dispense with the normal standards of journalism and not bother to confirm if the information he writes is truthful. One of his posts labels me as a “Catholic activist” and states that I “applaud the findings of the Mother and Baby Home Commission of Investigation”.

John Ryan has not read a single word I have written, nor did he try and contact me to confirm if the allegations he was about publish were true.

In one article he mentions the names of two women as his source: Breda Murphy and Annette McKay. I know Breda Murphy; she is a lovely woman and is nice to the point of being gullible. Breda is a sucker for a sob story, especially if it supports her opinions, and is never one to think scientifically and seek out contradictory evidence. Annette McKay, on the other hand, I have never met but appears to have made a name for herself making all sorts of unsubstantiated allegations about mother and baby homes and the women who ran them.

Despite seven years of work, the examination of one million historical documents, the commission of investigation into mother and baby homes found that there was no evidence to support most of the allegations supported by Breda Murphy or Annette McKay. Evidence is not something these to care about and so have been up in arms trying to discredit the commission to save their embarrassment. Paradoxically, conspiracy theorists never need evidence to support their opinions, and when no supporting evidence is found, they imagine that the investigation must have been a conspiracy against them.

As I have stated before, and I have written in my book, the commission of investigation made significant errors, as they were not well-equipped to investigate medical matters. However, despite their many howlers, the commission could not find evidence of murder and abuse at mother and baby homes. Such charges relied on an incompetent interpretation of medical terms on death certificates. An issue on which I had written and was published three years before the commission’s final report became public.

However, without any fact checking, Annette McKay took to the tweet machine to laud her own intelligence and claim that I have to be told what to believe by the commission of investigation.

‘There was no physical abuse, there were no starving babies’ He claims that because the final report told him so. The damage caused by the misuse of our personal testimony allows these conspiracy theorists to thrive. — Annette Mckay (@AnnetteMckay15) August 9, 2021

There you have it, the commission were conspiracy theorists and so too are historians like me.

FYI, I was invited to speak at the children’s cemetery in Tuam as part of the filming of a documentary. There were bloggers present who broadcast the interview live on the Internet. The scandal promoters then spread copies of selected parts around through their various outlets. However they managed it, they left out the parts of the interview where I presented incontrovertible evidence which shows that their allegations are false. The truth, or indeed even an opposing opinion, cannot be allowed to reach the ear of reasonable people for fear of being found out.

The Tuam cemetery film was only a part of the documentary. There is much more to come.

Suggesting that I am “a Catholic activist” would have my friends ROTFL, for days on end!

The definition of a ‘Bodger’ is a creator of ‘worthless or second-rate’ items and so the Broadsheet writings of John Ryan certainly lives up to his moniker. However, sheet is what a Mexican exclaims when he hits his thumb with a hammer, and so broad sheet could easily be renamed muck-splatter.ie — guttersnipers at work. Read it but only if you want your prejudices titillated and your wobbly bits wobbled but look elsewhere for truth and quality journalism.