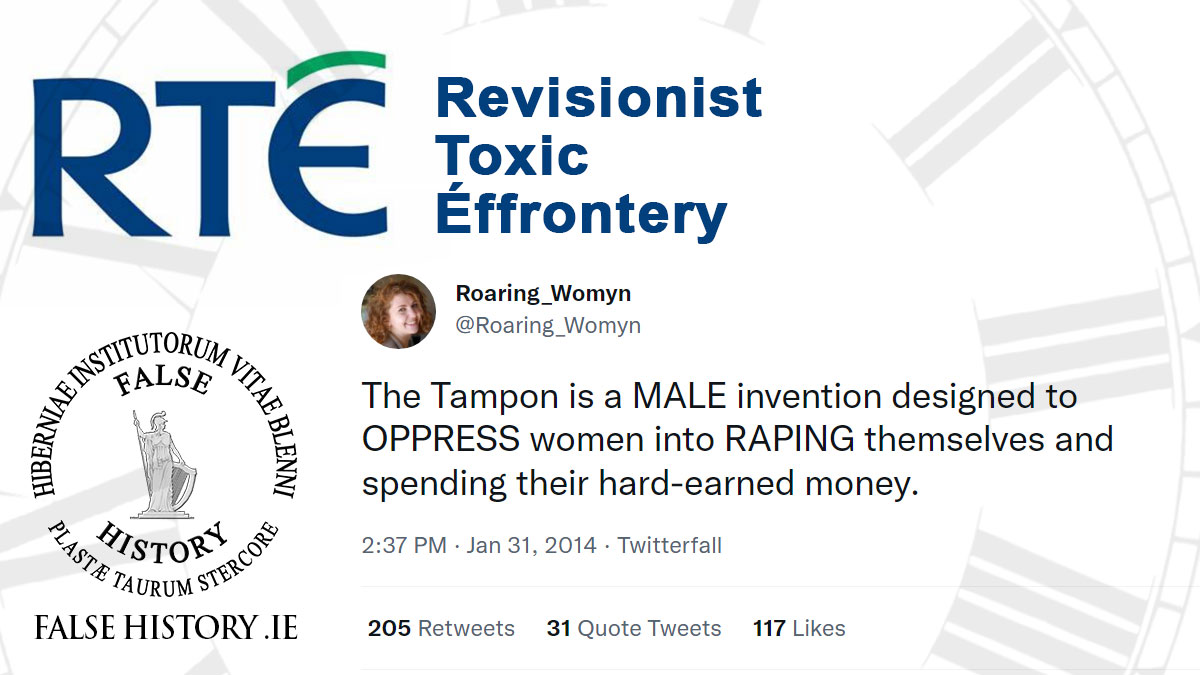 RTÉ is perusing it anti-Catholic agenda with gusto again this week with not one, but two false history programmes. Historians are taught that events in history cannot be properly understood unless they are set against the correct historical background. Without valid explanations, people will naturally interpret events through the eyes of today. It is a very easy tool to use to mislead people, but it is the tool of the propagandist, not the historian. A promo clip for the ‘The Way We Were’ documentary programme, uses comments from the usual collection of buffoons to deposit the old canard, that their parents, grandparents and all their relations were once a backwards people. Of course, no such programme could leave out Ireland’s supper historical daemon, Archbishop McQuaid. They say that he was against tampons because ‘he was afraid girls might use them to pleasure themselves’ but permit me set some context and see if the Irish self-loathing is rational or justified.

As you can observe from the tweet pictured above, the issue of tampons remains a topic of debate, with some women thinking that they were invented by a male so that women could rape themselves. An extreme view without a doubt, but take the recent debacle over a TV ad for Tampax tampons. It implied that women were too stupid to know how to use tampons and so the ad urged, ‘you gotta get ‘em up there, girls!’. When women complained about such condescension, Ireland’s crackpot feminists like Dr Ciara Kelly and Róisín Ingle were beside themselves and went more than a bit doolally. Ciara Kelly excitedly, but wrongly, thought it was men who had complained and mused that it was because they were obsessed with the contents of her vagina. She spent her entire radio show mentioning the word vagina in protest. In reality, if even if Ciara Kelly’s said body part had a tractor parked in it, most men would be more interested in its make, model and horsepower, than of the place where it happened to be parked.

As we have observed recently, tampons continue to be the subject of intense, and sometimes, hysterical debate. There are many issues surrounding their use and tampons have caused deaths from toxic shock syndrome and are associated with many more health problems. Tampons can contain rayon, dioxin, chlorine and asbestos and require a strict and effective regulation to ensure the quality of the product. Perhaps even more surprising is that while tampons are now ubiquitous in western society, they are rarely seen elsewhere. Seemingly trivial issues like the requirement to have running water to use tampons safely, prevents their use in many parts of the globe where such facilities are rare. There is also, without any doubt, cultural taboos restricting their use, but the nonsense within the debate is almost entirely due to the rise of crackpot feminism. Take the photo of these two as a prime example. They were victims of a hoax but took to the streets of London in support of ‘Operation Freebleeding’, a ‘new radical feminist movement.’ The hoaxers used the trigger that ‘tampons were just another brutal expression of the oppressive patriarchy’.[1] As it does not take much to trigger crackpots these days, the hoaxers succeeded brilliantly by causing so much outrage on social media that even bone fide news organisations fell for the hoax. [click photo to view in full size]

McQuaid acting on medical advice did in fact write to Con Ward, then the parliamentary secretary to the Minister for Local Government and Public Health in 1944, urging that Tampax in particular be banned from sale.  As far as I can ascertain, his correspondence made no mention of his fear that the items could be used by women to pleasure themselves. That notion appears to come from a New Zealand based academic historian, Margaret Ó hÓgartaigh, who writes feminist history — not in a cold and clinical academic fashion — but with the addition of the full gamut of emotive terms. In an article, reprinted in the History Ireland magazine, she speculated that the archbishop’s objections might have been based on ‘the cultural anxieties of the era’.[2] Despite it being mere speculation, every blogger from RTÉ’s Miles Dungan to the thickest gombeen on the Internet, has run with Ó hÓgartaigh’s speculation and presents it as if it were a fact.

It might be hard for RTÉ producers to understand that speculation is not fact, and the main ingredient of quality evidence-based documentaries is that information is presented in a balanced way. One-sided programmes designed to promote hatred, or putting other people down — so that those who feel that they are a nobody can create a false feeling of superiority —  is very, Irish, but it is telly for the lowest of the low.

RTÉ does not do quality history, but stands as the very exemplar of Revisionist Toxic Effrontery.

[1] Delingpole, ‘“Free Bleeding” and the Stupidly Clever Feminists Who Fell for It’.

Delingpole, James. ‘“Free Bleeding” and the Stupidly Clever Feminists Who Fell for It’. The Spectator Australia, 15 August 2015. https://www.spectator.com.au/2015/08/free-bleeding-and-the-stupidly-clever-feminists-who-fell-for-it/.