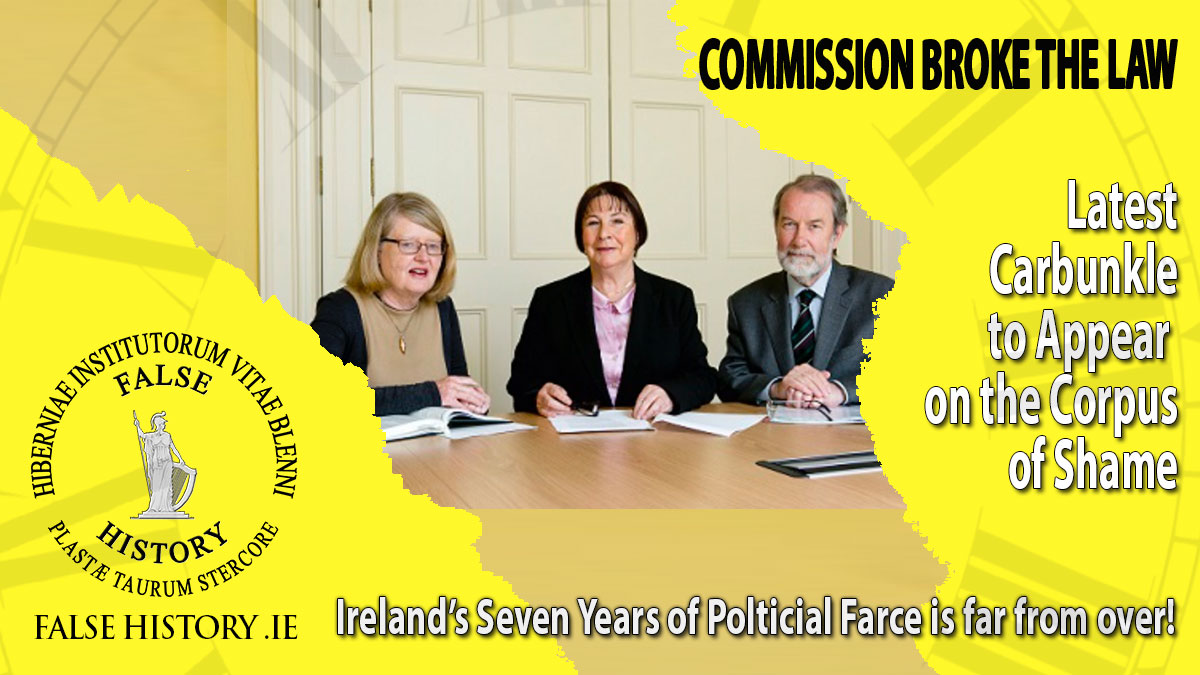 Yet another carbuncle has been added to the corpus of Ireland’s mother and baby homes saga. In a recent judgement, the Irish High Court has ruled that a Circuit Court Judge, a Professor of Law and a Professor of history did not know the first thing about law and so ‘acted unlawfully’. I imagine the judgement will be met with some embarrassment by the three people who headed up the commission of investigation into mother and baby homes, a professor of history, but especially the two ‘distinguished’ lawyers.

Dr. William Duncan is a former Professor of law at Trinity College Dublin, a Member of the Law Reform Commission and Deputy Secretary General of The Hague Conference on Private International Law. His work with the latter organisation earned him a ‘Presidential Distinguished Service Award for the Irish Abroad’ in 2020. However, the quality of his discernible contributions contained within the final report of the commission of investigation into mother and baby homes, are not reflective of a high and mighty barrister, not to mind a professor of law.

Before her appointment as a circuit court judge, Ms Justice Yvonne Murphy practised at the Bar on the Northern Ireland and Dublin Circuits. She is a member of the Bar of England and Wales and of the Bar of Northern Ireland. She was appointed to head two previous investigations into sex abuse perpetrated by clergy, and was married to the late Supreme Court judge, Adrian Hardiman.

It is fair to say that both these people are highly respected by their legal colleagues and by the Irish political establishment, but their report contains a litany of basic errors ranging from mild to shockingly bad, mostly due to the commissioners’ lack of basic knowledge — let alone expertise — in the area they were tasked to investigate. Between them all, there is no evidence to suggest that they were in possession of even a jot of knowledge of aetiology, pathology, epidemiology or statistics, particularly mortality statistics, issues and practice.

Appointing people to a commission of investigation without the necessary skills to do a reasonably good job was not the responsibility of the commissioners. The blame for such ineptitude lies completely with the seven political dwarfs who instigated, presided over and acted on the findings of the commission, without expending a single microjoule of energy on brain power. They accepted the stereotypes, took no action which may have led them to formulate an informed opinion, and so allowed Ireland’s dishonest or delusional politicians and demagogues to have free rein on the floor of the houses of the Oireachtas. Many stepped forward to make entirely false allegations — not one allegation was supported by evidence — of women starving babies to death, both protestant and catholic. Their motivation — according to an absurd and quixotic claim by University College, Dublin Professor Diarmaid Ferriter — was ‘to get rid of an embarrassment to catholic Ireland’. A master of equivocation, with a reputation as an anti-Catholic, he was egging on people towards the belief that the Irish government had a secret eugenics agenda and so ‘colluded’ with others to rid the country of undesirable people, primarily, illegitimate children. The logical conclusion — which he was careful not to state directly — was that the government secretly contracted religious organisations to operate death camps for unwanted children. Ferriter’s comments are the emblematic of the foundation stone on which the entire scandal rests, the notion that women hated other women’s illegitimate children so much that they were prepared to take them into their care, in order to secretly kill them.

Two women who gave evidence to the commission felt that their stories were not accurately reflected in the commission’s final report. They claimed that they should have been given a draft copy of the report, in advance of it being sent to the Minister for Children. Accordingly, the High Court judgement of December 2021 ruled that the commission breached its statutory duty under section 34 of the Commissions of Investigation Act 2004, by failing to provide each of the applicants, who are identifiable in the report, with a draft before the final report was submitted to the Minister for Children.

The key element is outlined in bold above. The judgement was handed down despite the fact that all witness statements in the final report were written without using real names of many of the complainants. However, the two women claimed that they could be easily identified as their stories were already in the public domain. A point which the commissioners apparently did not anticipate and so were judged to have acted ‘unlawfully’. A ruling which would appear to be a tad severe given that it may be due to a genuine mistake. However, given the calibre of the lawyers involved, it is amazing how prone they were to make such a junior mistake.

There is no doubt that after seven years of investigation the commission was tired and very tired of listening to baloney from witnesses, activists, journalists and politicians and wanted out as soon as the final report was sent to government. They could not wait to dissolve the commission and refused to answer questions about their report to all and sundry including the government. I think they correctly anticipated that the Irish government and certain politicians are not willing to hear the truth. The truth would of course come as an embarrassment to a lot of people including the seven political dwarfs who all have questions to answer regarding hate speech, the promotion of lies and plain old-fashioned ignorance of history.

More on this subject anon.