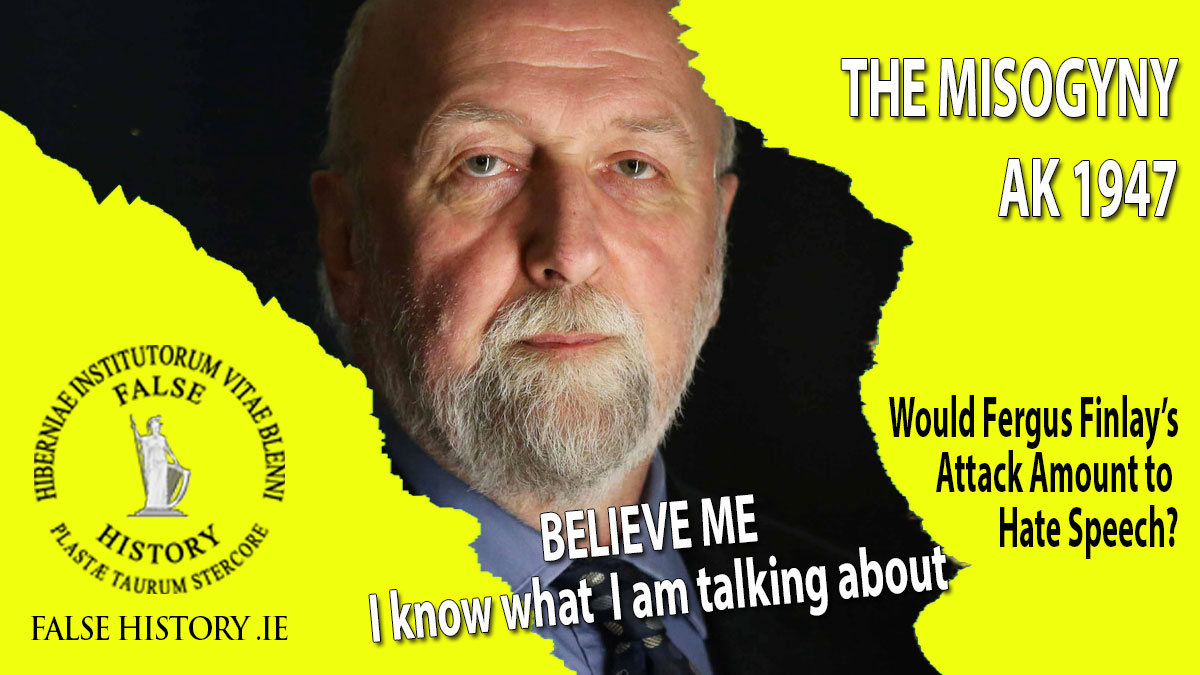 Fergus Finlay tells his readers to believe him on the sole basis that he ‘knows what he is talking about’. It is a warning to all that they cannot rely on evidence, especially evidence which contradicts his pinion. Relying on solely on one’s credentials to lend truth to an argument, is a logical fallacy, its use has been unacceptable for decades and is taboo in the intellectual tradition.

In 218 Finlay retired as CEO of Barnardos, a children’s charity, the biggest beneficiary of taxpayer’s money, on a fat cat pension after years of drawing a salary ‘in excess of government guidelines’. Like the Tuam Children’s Home, Barnardos has been subjected to sensationalist reporting for burying 500 children in unmarked graves. Barnardos’ institutions, like all other such institutions, had a high infant mortality rates at a particular time in history.

Finlay tells us that there is ‘huge evidence’ for a range of claims which clearly Finlay believes to be true, but the commission have rubbished most of them.

He is evidently annoyed that the commission shared the blame with wider Irish society, and he wants to firmly lay it back on the Catholic Church, and to it alone. Accordingly, Finlay’s article shows clear and unequivocal evidence of anti-Catholic prejudice.

Prejudice is not founded on reason and therefore cannot be removed by reasoned argument. Moreover, prejudices are so highly resistant to rational influence that they will defend themselves no matter what the cost is to their keeper.

When genuine proof to underscore an opinion is unavailable, it is now common practice to call forth from the heavens, the avenging angels of ad-hominem. A practice where one attempts to give credibility to their argument, not by proving their point, but by casting a personal sneer at the opposition. Finlay wrote: ‘they produced a report that was so unworthy of the calibre of people involved’. A stylish sneer, but a sneer nonetheless.

‘I’m older than you minister’, declared Finlay. Patronisingly hinting that the Minister for Children was too young to understand the report findings, and if he was as old as him, he too would be as anti-Catholic as he. Get off yer ass sonny, and listen to me ‘cause I know what I’m talking about!

To add more power to his opinion, Finlay loaded his most fearsome weapon, his AK, with misogyny bullets and managed to squeeze off four rounds at the target of truth. He declares that misogyny is the only reason to apply a stigma to unmarried mothers. However, Finlay misses the elephant in the room, and fails miserably to factor in the cost to children. The entire system was instantiated by the church 1,700 years before, to protect children from infanticide. Misogyny bullets are made of a compound of ice and balderdash and melt before reaching the target of truth. It is too distant for many to see, but it is always worthy of making the effort to check the target, no damage, no score.

If Finlay had an ounce of impartial intent, he would no doubt have brought evidence such as this to public attention before casting such slurs.

The real attitude of the state was summed up in an infanticide case by Mr. Justice Kenny. K.C. in 1928

Infanticide has become a national industry in parts of this country the number of newly-born illegitimate children murdered is very great; their bodies are disposed of with a great deal of skill, so much so, that the people guilty are not often brought to justice. An illegitimate child is entitled to the protection of the law just, ns much as one born in lawful wedlock. It is in no extenuation of illegitimacy that 1 say that some of the most distinguished people who ever lived were illegitimate. I have no doubt that, young girl that you are, that your murder of this child was deliberate. It must be brought home to all girls in this country that they am amenable to the law and must suffer this crime. No doubt there is another person in each case who should suffer too, but he cannot be got. But somebody must pay the penalty —not the penalty for being immoral, but the penalty for taking human life. The life of this child might have been valuable: it was of some value at least, and that child was entitled to the protection of the law of this land.  […] that their lives are just as sacred as the lives of any other children, and that the State is prepared and has always been prepared to support and maintain them until they reach an age when they can work for themselves.

‘It is fortunate that each generation does not comprehend its own ignorance. We are thus enabled to call our ancestors barbarous.’ – Charles Dudley Warner

See this article for more information.