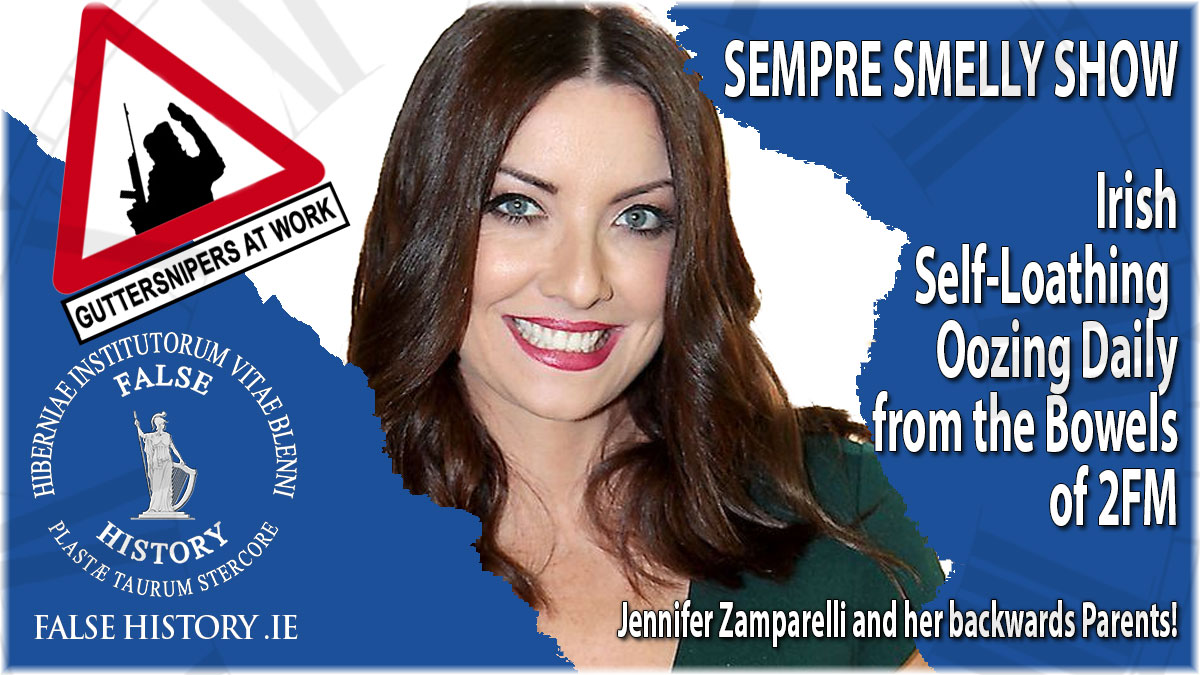 Jennifer Zamparelli has made it her mission to broadcast the flatulence of Irish self-loathing from the basement of the RTÉ radio centre on each weekday morning. 2FM is a popular music station with a previous reputation for good music combined with frivolity. Currently such frivolity is provided by Doireann, Donncha and Carl in the early morning and the two Johnnies in the late afternoon. In between is the Jennifer Zamparelli Show, which runs from 9am to midday. During that time Zamparelli never misses an opportunity to claim that her parents were backwards. In fact, not only were her parents backwards but her entire family along with everyone else in Ireland was backwards until very recently.

Such self-loathing is a very common prejudice among the Gaelic Irish and as the name Zamparelli, is not Gaelic, I was a bit surprised to find the prejudice with the same force of strength as the native Irish. I confess to not knowing much about her background and I have never listened one of her shows in its entirety. Occasionally however, while channel hopping on a break from work, I land on 2FM only to find Zamparelli banging on about Lesbian, Gay, Bisexual, Transexual and Queer issues, and using them to sneer at the Irish nation. It’s her favourite subject and hardly a show goes by without herself or a guest falsely rewriting history to claim to be a victim.

Had porn star Andy been English, or of any other nationality, I’m one hundred percent sure that when it became known locally, that his family members were related to a man who is famous only for the public display of his big Mickey and the practical demonstration of its secondary function, they too would get ribbed about it. There is nothing uniquely Irish about such behaviour. All famous people are the subject of comment, ranging from mild to abusive, untrue to plausible and unacceptable to invasive. Most of it carried out by journalists, to feed the insatiable appetite of the broadcast and print media, who in turn feed it to the braying masses.

It turns out that Zamparelli is her married name and that her maiden name is Maguire. A more Gaelic Irish name one could not have, and so the strength of her self-loathing now makes sense and is explained by her family origins.

Born in 1980, Jennifer Maguire is of a generation who were deprived of a complete education in Irish history. The British rule of Ireland is a story of appalling abuse, economic, physical, and governmental. Consequently, our true history has the power to incite resentment and hatred of the British. Therefore, in the late 1970s and 1980s, when the Northern Troubles were at their height, the Irish government took the decision to de-emphasise the British crimes, violations, and economic embezzlement within the schools’ Irish history curriculum.

Whether the Irish government intended it or not, the net effect of its education policies has been to instigate an about-face. It took the British from being the villains of history to the white knights, who quixotically set about to rescue the Irish from their backwardness.

The Maguire clan the full brunt of the English reconquest of Ireland, they, like many others, ended up losing their land, lives, and titles but more importantly their social status.

Forcibly impoverished and socially immobilised, the Gaelic Irish were left with only one road open for those who wanted to advance their social status. The road still runs through the Valley of Sneers even today. Nowadays, when people want to feel superior to others, the buy an expensive German car (on a PCP or hire-purchase), join a golf club, stay in a five-star hotel, move to an upmarket neighbourhood and so on. If no such routes are open, then one can create illusions of superiority by putting people down, mostly expressed through sneering.

The vanquished Maguires together with many other once noble clans, desperate to reclaim some of their former status, took to siding with their British masters. However, entry to the British club required that the British be lauded, and the Irish sneered at.

To bait fish withal. If it will feed nothing else, it will feed my revenge. He hath disgraced me, and hindered me half a million; laughed at my losses, mocked at my gains, scorned my nation, thwarted my bargains, cooled my friends, heated mine enemies, and what’s his reason? I am a Paddy. – Paddy Shylock, Act 3 Scene 1, The Merchant of Ennis.

Jennifer Zamparelli is almost completely unknowledgeable about Irish history and society. The little knowledge she has managed to acquire has come from a barstool bore, and not from the expending of energy on scholarship.

Trying to feel big by sneering at others is the most enduring historical pursuit of Gaelic families even today. However, when sneering at the Irish they also sneer at themselves, hence the term self-loathing.

I would suggest that an ignoble award is appropriate. I will call it “the Zamparelli acronym” — Leave Gaelic Bull-manure To Quarrellers

What could a woman do that could have a man tried and executed?
The answer… have sex with another woman. Yep, lesbianism was never banned in these islands. Why? Queen Victoria refused to believe that women would engage in such acts. However, having no truck with British discrimination, it was proposed that after Irish independence, the Dáil would give equality to women by criminalising female homosexual acts, alongside those of males. It was, however, never enacted.

The English executed dozens of men for allegedly having sex with other men. I can find evidence of only two men who suffered a similar fate in Ireland. John Atherton and his alleged lover John Childe. They were not hung by the Irish, but by the English authorities in Ireland.

Atherton was the Anglican Bishop of Waterford and Lismore, who spotted that the Irish had no law banning male homosexuality. He became one of the prime advocates for such a law. Ironically, when it came into force, he and his servant became its first and only victims. They were both hanged on St Stephens Green on 5 December 1640. It is now thought that Atherton was innocent, the victim of character assassination.

The naive Irish Brehon Laws show an awareness of homosexuality, but it was never outlawed. The first time it became outlawed in Ireland, it was due entirely to the British.

The first of what might be interpreted as anti-gay laws on the continent were brought in to protect boys from pederasts. David Norris, Ireland’s most famous gay rights activists, was forced to withdraw as a candidate from the 2011 Irish presidential election when he declared support for pederasty. Pederasty, in Norris’ mind, was where a man takes a boy to live in his home for sexual relations who, in return, receives free board, lodgings, and an education. Norris, always popular with the Irish public, was the favourite to win the election but has since dropped out of public view.

Gay people were always well tolerated in Irish society. Even in the 1970s, when the British Gay Liberation Front was in full flight, RTÉ carried many British shows with gay themes. Dick Emery was especially popular, and one of his gay catchphrases, “Oh hello honky tonks”, became a common greeting in Ireland during the 70s. Emery was joined on Irish screens by a plethora of camp and gay characters, presenters, and actors in popular TV shows like Have You Been Served and films like, the Carry On series. The Kenny Everett Show was one of my favourites. Kenny was famous for being gay in real life and for his portrayal of outrageous characters, many of them gay.

The reality is that the Irish are one of the most tolerant nations on earth. They continue to victims of racism from their own kind and tolerate it with gay abandon!