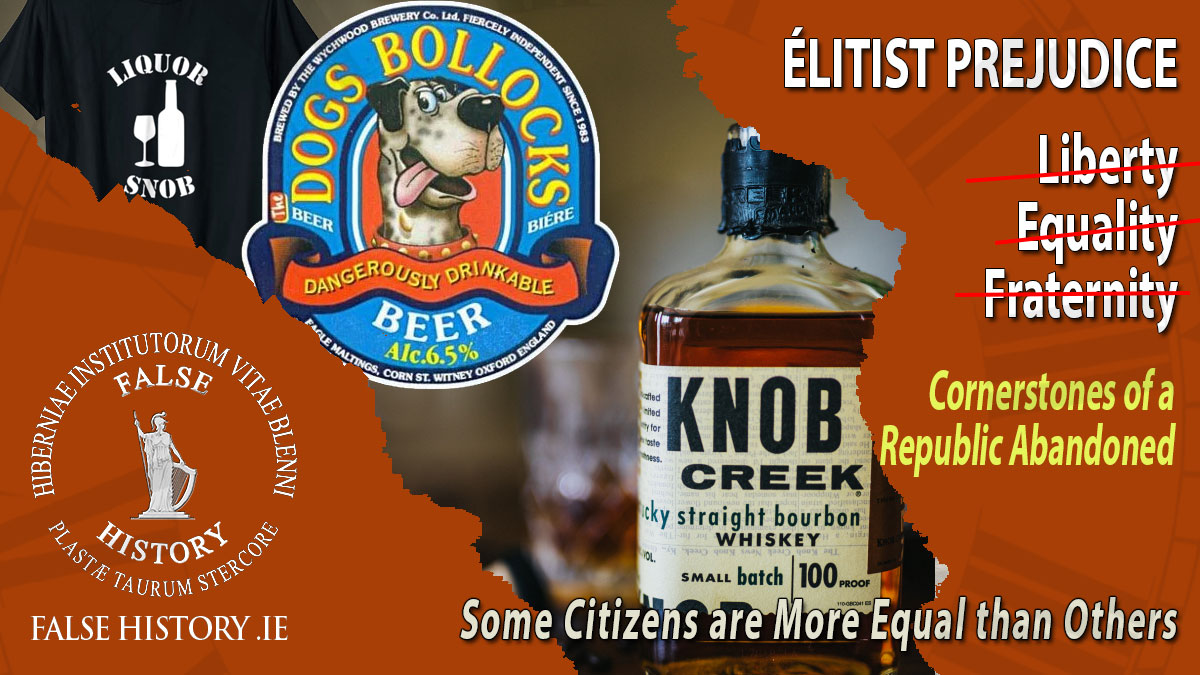 In the same week when medics expressed concern about the high consumption of cannabis and its negative health effects on Ireland’s young people, the Irish government, lacking in the ability to do joined up thinking, put in place a strategy to encourage more young people to consume illicit drugs. One junior minister explained the rationale behind the new minimum alcohol pricing law, was to put ‘alcohol out of the price range of our children and young people.’ Using the same logic, should our politicians have introduced a minim price per gram of cannabis at the same time. Why not include crack cocaine, heroin, smack, speed, yokes and the whole gamut of substances which young people use to go in search of oblivion?

Worse than poor quality thinking is the elitist prejudice expressed as a sneer at Ireland’s struggling classes. Most of the country’s political elite frequent establishments where the cheapest bottle of plonk sells for €25, which after January 2022, will still cost €25. A zero percent price rise for certain classes in Irish society.

Are the struggling classes so detestable that Ireland’s political elite want to punish them and make their lot even more miserable by increasing the poverty penalty? The children of middle-class problem drinkers do not have to rely on charity, unlike working class children. Taking more money out of a family will only increase their reliance on alcohol subsidisation charities like Barnardos. That’s right, tens of thousands of poor families are able to survive on social welfare payments and do not have to rely on charity. In contrast, the households which continually rely on charity have issues with substance abuse and mental health.

An addict will have to have their fix not matter what the cost to them be it in financial terms, health terms or reputationally. Increasing the cost will not reduce consumption but take away from any funds left over after the addict has serviced their addiction.

Minimum price per unit of alcohol is aimed exclusively at the poor and the struggling classes. Its intention is to ‘modify behaviour’ but its foundation is on elitist snobbery best illustrated by egalitarian pricing. The cornerstone of a republic is equality and if price is to be used to modify behaviour, then equality demands that the behaviour of citizens be modified equally. Accordingly, if a person on a social welfare payment of €201 per week pays €6.00 for a pint of beer, then An Taoiseach, should pay pro rata €121.25and Leo Varadkar, €112.07. That would ensure that Micheál Martin is subject to the same behaviour modification demanded by equality. All others should pay pro rata based on their gross income, for example, Robert Watts would pay 167.82 for the €6 pint of beer, a Garda €22.43, a carpenter €20 and so on.

As things stand, a bottle of wine at a restaurant costing €25 will remain at €25, demonstrating that the middle classes will not be affected nor subjected to ‘behaviour modification’. However, if egalitarian pricing was introduced then Micheál Martin would have to pay €506.46, Leo Varadkar €466.97, a Garda would pay €93.45, a carpenter €83.34 and Robert Watts €698.43.

In time, it would of course bring a measure of esteem to some members of the riff-raff, as I am sure a few of whom would be invited to dine with the élite, perhaps even at the same table, for the sole purpose of purchasing the wine.

The Poverty Penalty is the term used to describe the additional cost paid for goods and services by poorer people relative to the more affluent. Thus, the greater a person’s income the less impact price will make to modifying their behaviour, not least because they already drink products which will not be affected by price increases.

Regressive taxation is a related term which acknowledges the Poverty Penalty, and we now have a government, like our colonial masters of old, which seeks to attack its people for no other reason than to pander to their illusions of superiority expressed through a vacuous snobbery. The exact same elitist behaviour which caused the masses to rise up all over the globe to enshrine the three foundation stones upon which a republic is built: equality, liberty and fraternity. All of which have recently been trampled over by Ireland’s over paid elites. The poor are thirsty, Leo Antoinette, ‘let them drink our dregs’!

Most anti-social behaviour due to alcohol and substance abuse is carried out by young people, a cohort with more disposable income than most others. A price increase in alcohol is very unlikely to reduce alcohol consumption and may in fact incline the young and others to illicit drugs. Increased tobacco prices have already made the smugglers rich beyond their wildest dreams, so why send more money their way.

The struggling classed have already been hit hard and are bearing the brunt of carbon taxes, while at the same time they are put to the pin of their collar trying to pay high mortgages, and high rents.

A price increase will not have the consequences its advocates intend, and will bring about many of the problems which only joined up thinking might foresee. It is based on narrow thinking, prejudice and fundamental ignorance of the nature of addiction, self-medication, and the many benefits which alcohol brings to the majority of the people and society in general.

On the public announcement of the strategy, Leo Varadkar declared to the nation ‘the truth is that too many of us drink too much and too often’. OK then, use price increases to modify your own behaviour and introduce egalitarian pricing. Make Ireland no country for the same auld snobs who caused many rebellions on this island and others. #BlueShirt #TaePots