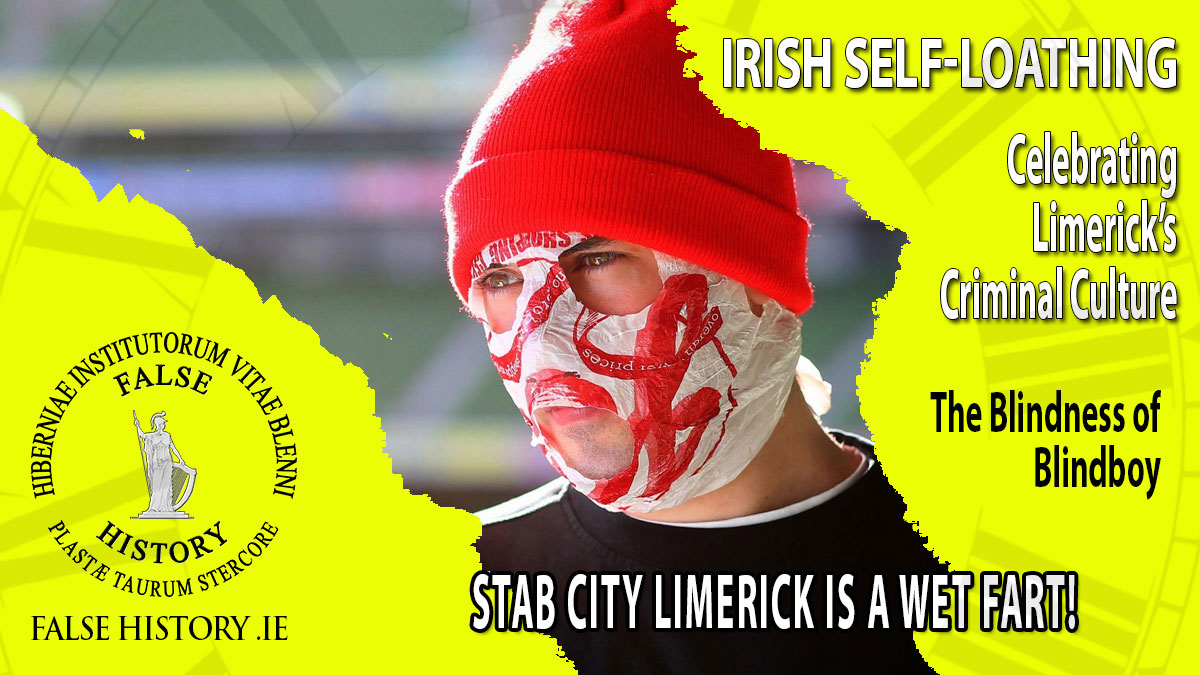 Isn’t it amazing how Blindboy, who celebrates or at least draws attention to Limerick’s reputation for criminality, gets miffed when Forbes believes the Rubberbandits! Blind indeed.

The Rubberbandits made their name through lampooning Limerick’s criminal classes using a plastic shopping bag for facial disguise instead of the customary lady’s nylon tights. The net effect is to reinforce the public view of the prominence of criminality within the city. It has become a celebrated part of the city’s culture, so much so, that Limerick city in its bid to become the European City of Culture 2020, enlisted the services of city’s fake and comedic criminals. The bid ultimately failed bid but quite what the European judges thought of what constituted Limerick’s culture is unknown, but it would appear that no other city celebrates is criminal classes with such alacrity as Limerick.

The Rubberbandits might counter with arguments that they are really lampooning the lower classes of Limerick. However, only a tiny proportion of these people might have a need to wear a disguise on occasion. It is also unfair to associate swathes of the population with criminality. Moreover, it should come as no surprise to anyone to see that Limerick has become, unfairly, associated with criminality, a view reinforced by Blindboy Boatclub et al.

Mr Boatclub angrily dismissed an article published by the American Forbes magazine describing it as a ‘wet fart’.  The article concentrated on the negative aspects of Limerick and had the audacity to use the city’s nickname, ‘Stab City’ and went it on to claim that the billionaire Collision bothers were lucky to escape the warzone. The Collision brothers, natives of Limerick city, founded the Stripe Internet payments company which required them to move to Silicon Valley in California and they became billionaires in a very short period of time. Hence, the notion of escaping Stab City.

It was they who were the subject of the article written by an Irishman, Stephen McBride who was born in Dublin but now works in America. Using his local knowledge and filtering it through many Irish cultural biases, he produced yet another expression of national self-loathing. McBride took all the negative commentary about the city and embellished further to a point where the Collision brothers described it is daft and bizarre.

The reality is that Limerick is a lovely city and I visit it regularly, and I recommend visiting to all my friends and acquaintances. California has a murder rate three times higher than Ireland, so one is much safer in Limerick than California.

The debacle is emblematic of a problem in Irish society which largely remains unaware of its malignant effects. In the book I name this set of behaviours,  ‘Clurichaun Syndrome’, which you can see expressed daily through the media where Irish people, of normal intelligence, can think that they can make loathful comments about the Irish nation, and it magically does not apply to them, nor their family and friends.

Blindboy is also blind to clurichaunism and most of his audience think that he is just expressing Irish self-deprecating humour. But there is a lot to suggest that the Rubberbandits, like many of their fellow country people, are unable to rise above the prejudices of their ancestors. William Hazlitt once wrote that ‘prejudice is the child of ignorance’ and I add that her most precious child is Irish ignorance due in no small part to its ability cause real world harm.

Irish children are not allowed to be proud of their country and the achievements of their fellow country men and women. Almost every Irish child is taught that that Irish people, outside of their social circle, are faulty human beings. Of course, it is set of views which are also held by people outside of one’s social circle so that they think you too are nothing more than an ignorant gobhite. Accordingly, people are blind to the fact that their negative prejudices apply to them, so it is like a blind self-loathing. It has many practical implications which have the net effect of taking children out into the back year and shooting them in the foot. Their future prospects are damaged by the fact that they had the misfortune to be born Irish. Many cannot wait to emigrate to get away from the fault human beings in the forlorn hope that the superiority of people from other nations with rub off on them.

Irish people will support English soccer teams in their hundreds of thousands, leaving a few hardcore people to support their own. The result is that Irish children’s prospect of becoming a professional footballer are greatly diminished. It is emblematic of a centuries old problem where Irish investors have a preference for not investing in Ireland.

Many Irish employers have a preference for hiring non-Irish people. Irish universities cannot produce enough talent, with result that all the giant multinational companies with operations in Ireland are staffed by a huge majority of talented individuals from abroad. At the same time, Irish third level graduates have to go abroad to find work. Irish universities are engaged in grade inflation, effectively pulling the wool over the eyes of gullible politicians but not the employers.

The Irish society of the early 21st century is a society in chaos, its identity smashed with false notions of women misogynists and a deeply misogynistic society. A set of historical falsities which the Rubberbandits have keenly promoted and done so using pure Irish ignorance.

You probably would not believe it, but I do like the Rubberbandits, they showed great talent with their song ‘Horse Outside’ and great poetic talent in the Irish language version of ‘I Want to Fight your Father.’

However, as Albert Einstein astutely observed, ‘few people are capable of expressing with equanimity opinions which differ from the prejudices of their social environment’, the talent of the Rubberbandits is wasted through promoting myths with no basis in fact. They have deposited many ‘wet farts’ about the Catholic Church and no doubt stored the resultant soiled underwear in a plastic shopping bag. Sometimes it looks like the forgot witch plastic bag was used  to store the said underwear. 😀