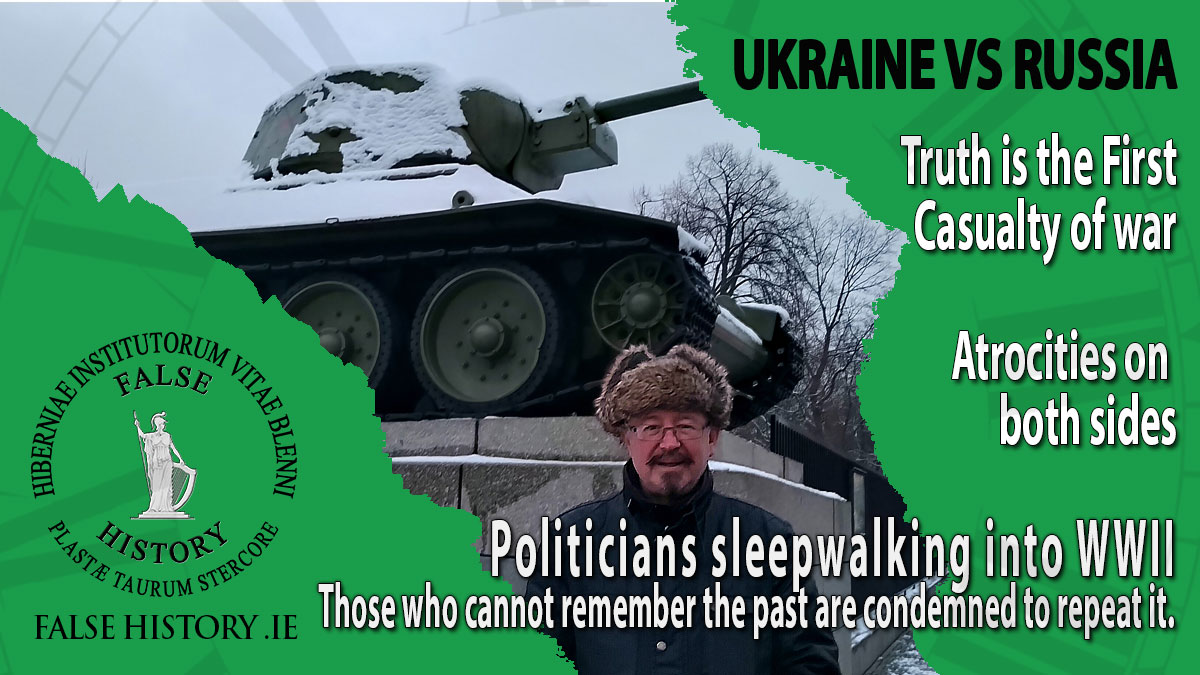 These are the first three maxims of war upon which impartial investigation and recording of events are built. These maxims appear to be completely unknown to Irish journalists reporting on the war in Ukraine. Accordingly, their reporting is biased and is not allowing the public to view a true picture of events in Ukraine.

The country’s President, Volodymyr Zelenskyy has become the darling of the western media and his view alone is presented as fact without any attempt to test his pronouncements for truthfulness. Zelenskyy is on a mission to secure military support in his country’s fight with vast Russian military machine and so has plenty of motivation to exaggerate and misreport events to horrify people in an effort to stir them into action. His claims along with those of Putin and all sides involved in the war should always be subjected critical analysis. No such analysis has been done in Ireland, and it took six long weeks into the war for the Irish Times to report the finding of evidence, which appeared to show Ukrainian military personnel committing war crimes. In comparison, the media were reporting daily about alleged Russian war crimes. The second maxim of war tells us that the Ukrainian army have been committing war crimes as well as the Russians.

All armies commit atrocities, and that includes the Irish army. Next March marks the centenary of the worst atrocity committed during the Civil War by the Free State Army. After midnight on the 6th of March 1923, nine prisoners were tied to a landmine at Ballyseedy Cross two miles outside Tralee, Co. Kerry. The explosion left eight men dead, with one miraculous survivor who was blown by the blast across the road out of the sight of the Free State soldiers.

The American military killed 408 civilians who were taking refuge in an air-raid shelter in Baghdad during the first Gulf War. In July 1950, around 400 South Korean civilians were killed in the town of No Gun Ri by US forces from the 7th Cavalry Regiment. On the third of July 1998, the American military shot down an Airbus airliner, killing all 290 people on board. This is just a small sample, as the list of American atrocities is long and makes for difficult reading. It has been estimated that in all the wars involving the US military post-9/11, that 387,072 civilians have been killed (as of September 2021). The British, French, Spanish militaries also have a long list of war atrocities, as has every other army in the world.

It is a sad fact of war, that when combatants watch their comrades die or are militated, sometimes in horrific circumstances, they will seek revenge on people who they perceive to be their enemy. The recognition of this maxim means that well run armies can prevent the commission of atrocities by their service personnel, but they cannot be eliminated completely.

Sympathy brings support to your side, and having civilians attacked and killed will stir the emotions and hasten the supply of support. It has the added advantage of dehumanising the enemy as savages, demonising them for not playing by the rules of war, and making your fight seem like a fight between good and evil and justifying your actions, including your own atrocities. Accordingly, having your civilian population attacked and killed early in a conflict has become a highly important political and military strategy. On occasions, armies have attacked and killed their own people disguised as the enemy to ensure the blame for the atrocity sticks on them. However, such false flag operations do not always require such direct action. One popular device is to deceive the enemy into believing that civilian buildings are being used by the military, making them legitimate targets. Parking military vehicles around a hospital, for example, would give the impression that the building was being used as a military base. Leaving civilians in areas likely to be attacked or moving them into such areas is yet another false flag strategy. It comes with the added advantage that it would be hard to prove that it was done deliberately.

The fourth maxim is that ‘war is a dirty business’, and you can find yourself in just as much danger from your own side as from the enemy.

Ireland is normally neutral country, and this neutrality has served our military well in their various roles as peacekeepers over the decades. Neutrality is and was a prudent strategy for many reasons, not least of which is the country’s lack of military capability. It is astonishing, that within moments of a government commission concluding that Ireland did not have the military capability to defended itself, the Irish government dropped is neutral stance and sent military (non-lethal mar ya) aid to Ukraine. That is yet another sign of poor leadership, but also of how easily fooled populations are. Egging on war like it is a game of soccer will only increase the suffering of the people of Ukraine and prolong the war.

Advocating for peace and finding solutions to crisis can only be done by honest brokers trusted by both sides to be fair. Ireland has now removed itself from such an important political role and is acting like another tin pot state with military ambitions.

What if Ireland, last January, had counselled Volodymyr Zelenskyy to endorse a policy of neutrality rather than antagonise the Russians with moves to join a military alliance, which they consider hostile, would Europe be at war now?

Ironically, Ireland had to deal with its own separatist region post-independence and also the issue of enemy military bases located within the country. The politicians of previous generations, as history attests, were far smarter and more educated than the current lot. They solved the issue of military bases, not by joining a military alliance hostile to Britain, but by negotiation with the ‘old enemy’. Negotiation will happen in the future to solve the Ukrainian situation and the sooner that happens the less people will die.

One hundred years after the abomination which was the first world war, historians write of their amazement of how the political leaders of Europe sleepwalked into war. A war which could have been easily prevented, just like the current Ukrainian war. If we act as Zelenskyy urges us, we will sleepwalk into World War three. The only difference is that perhaps in one hundred years’ time, no one will be around to write about our sleepwalking politicians.