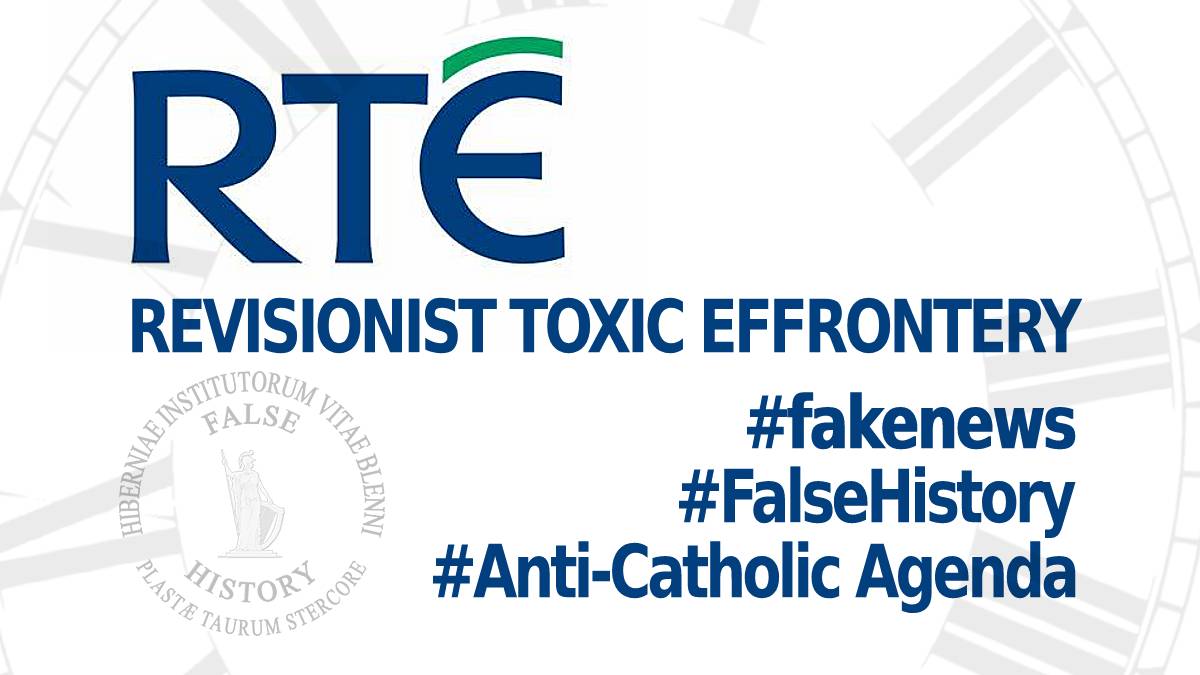 In direct contradiction of a commission of investigation findings, RTÉ continues to pursue its anti-Catholic agenda using the full gamut of propaganda tools. Like the mother and baby homes commission report which found no abuse took place at these institutions, RTÉ has ignored its findings and continues to imply that women took other women into intuitions to sneer at them and kill their babies. Absurdity has never been a barrier for RTÉ, but such is their anti-religious zeal that on occasions RTÉ producers and journalists have strayed from the cosiness of unprovable allegations and ventured into the world of provable evidence. On one occasion, not only were they proven to be providing fake news but the entire ‘Prime Time Investigates’ team was taken off the air for a period of months. In the aftermath of the damaging Fr. Kevin Reynolds affair, nothing really changed at the HQ of Ireland’s national broadcaster, they just fired the journalist involved and carried on regardless with their anti-religious agenda.

Ireland’s Dirty Laundry is the latest in a long line of false history productions to be screened by RTÉ. The producers say that it is largely the story told by former residents of the Magdalene Laundries.[1] Most of the stories are fairly innocuous but have been filtered to propagate the false impression of abuse. Stories like those of women having their head shaved conjure up images of admission to prison, as seen in Hollywood films. However, it was the standard treatment for infestations of headlice in the past. Headlice infestations today are treated with chemicals and vacuuming of the scalp to remove eggs, but such treatments are relatively new. Moreover, Ireland was the last country in Europe to rid itself of louse-borne typhus. A deadly disease which could rip through populations at alarming speed. During WWI on the Eastern Front, there were an estimated 30,000,000 cases of Typhus with 3,000,000 deaths.[2] To us, today, cutting off a full head of hair seems too drastic and unnecessary, but it was at that time the only effective solution for the problem.

It must also be remembered that many of the women who found themselves in Magdalen laundries lived in appalling, vermin infested conditions, at home. All the women came from deprived backgrounds and a significant number of women were also vulnerable — what today would be called, ‘suffering from mild intellectual difficulties’. These women were taken advantage of sexually, which only came to light when they had become pregnant. In practically all cases, their families could not afford to keep them and their babies, nor did many of these women have the capability nor the means to rear a child.

Some women claim that the abuse they suffered was verbal. They were told that they were worthless or ‘good for nothing’ which was a common expression. Most other people including school children suffered the same ‘abuse’ at that time. It was a common motivational tactic used by teachers to tell pupils that they would amount to nothing, they would only get a job in the sewers or as a delivery cyclist… all in an effort to get pupils to take their schoolwork seriously and study. It is a tactic long out of date and thankfully so, but it is revisionism to call it abuse. It is toxic to take advantage of the young and cause them to abuse the women of the past, including their own mothers, aunts and grandmothers. RTÉ tells them that they were all stupid misogynists. A notion which is #fakenews and false history.

The biggest lie of all is that Magdalene laundries were places of incarceration. The same charge has been made in the mother and baby homes scandal. If it were true, then Ireland would have the only prison system in the world where people, mainly women, had to apply to get in. Moreover, in both types of institutions, women were free to walk out the door, and many did exactly that.

Yes, sometimes judges sent women to the Magdalen asylums rather than send to prison. It was always with their agreement. Bet you won’t hear that in any part of the two-part documentary.

What we can say for sure is that the dirtiest laundry in 21st century Ireland is located in the Dublin suburb of Donnybrook and has gained a reputation for broadcasting Revisionist Toxic Effrontery.

[1] ‘Ireland’s Dirty Laundry – How We Made the New RTÉ Documentary’.