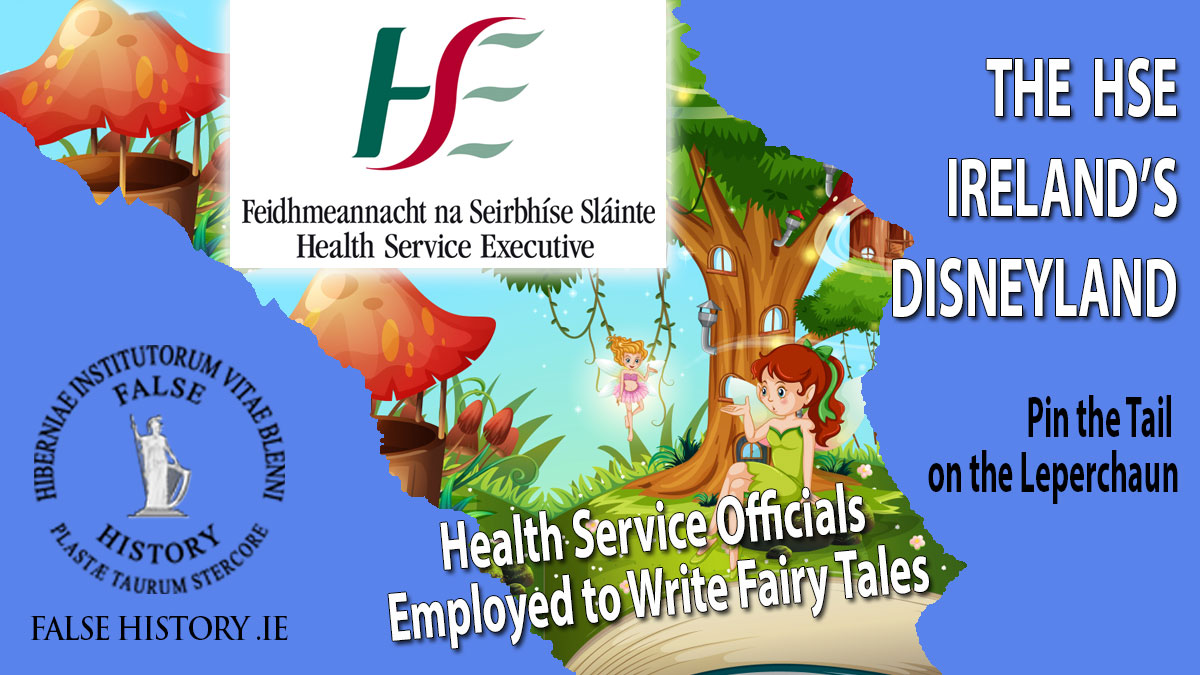 Once upon a time in a land of little people, officials were employed by the country’s health services to create fairy tales. Disney have a long history of taking European folklore and turning into a magical cinematic experience. The HSE on the other hand, employ more creative methods using the tradition Irish game of ‘Pin the Tail on the Leprechaun’. A picture of a leprechaun is pinned on to a wall chart, which can pivot so words and phrases can be chosen at random, all with crackpot notions.

As with the donkey version, blindfolded game players attempt to pin the tail as close to the leprechaun’s behind as possible. The pin invariably lands on a words or phrases, which are then used to produce random sneers and slurs, wound into a spiral of deceit and cast upon oneself and others. It is self-deprecating, self-loathing, small-minded black humour, written with the intent to give a sense of self-worth to people who feel worthless. A sense of self-importance gained the expense of others through gasbagging.

The report of the commission investigating mother and baby homes tells the story of the saga. ‘It appears that, in October 2012 two documents described as a file note and a draft briefing paper were circulated among senior HSE staff. […] These documents contained a number of allegations regarding Bessborough mother and baby home and the Tuam home.’

In other words, senior HSE staff filled a gigantic gasbag with crackpot notions taken from the leprechaun’s behind…

The commission of investigation comment: ‘details of the document were repeated many times including during a Seanad debate of 17 May 2017. It appeared to be accepted by commentators and politicians that the allegations and suppositions made in these documents were statements of fact.’

HSE Mission Accomplished, politicians, journalists, bloggers et al., became shivers in search of a spine, the buck-leppin leprechauns went a buck-leppin, the shillelaghs waved menacingly, thumping anyone and everything in range, jigs were danced and the magic mushrooms passed around. There was ballyhoo from Ballymaloe to Timbuktu.  Mouths frothed without the need for beer, and dung of all types was flung at their own ancestors and themselves.

What a session, you should have been there, the crack was 90… euros, there was no hangover suffered the morning after, no sense of shame and no apology.

In evidence to the commission, the HSE official [the witness] who prepared the document said she “could only recollect finding two photographs which appeared to be passport photographs for children being adopted to the US”.

With respect to the allegation that there was ‘more than one letter asking for money for an infant who had been discharged or died’ the witness stated that she had no recollection of finding more than one letter if even one letter. The witness stated that she did not come across any evidence of trafficking of babies and in relation to the phrase ‘it must be that it was facilitated by adoptive social workers’ stated that ‘I don’t know what that is alluding to’. The witness had no memory of seeing evidence relating to nuns claiming for a dead baby. The witness had found no evidence of trafficking of babies. The witness did have a memory of reading a letter from a couple who had gone back to America with their adopted child saying that they would send money on to ‘the nuns’. The witness remarked ‘I certainly didn’t see any evidence of vast sums of money being passed over, you know parents being groomed to have children in order to … for prospective adoptive parents’.

Disney could never create as much magic as the Irish, no other nation has the imagination nor the inclination to live within the imagination, and no one else needs to feel alive by fighting with the dead. Reality, honesty, and integrity are not the values of ‘senior HSE staff’, nobody expects high standards and none are achieved.