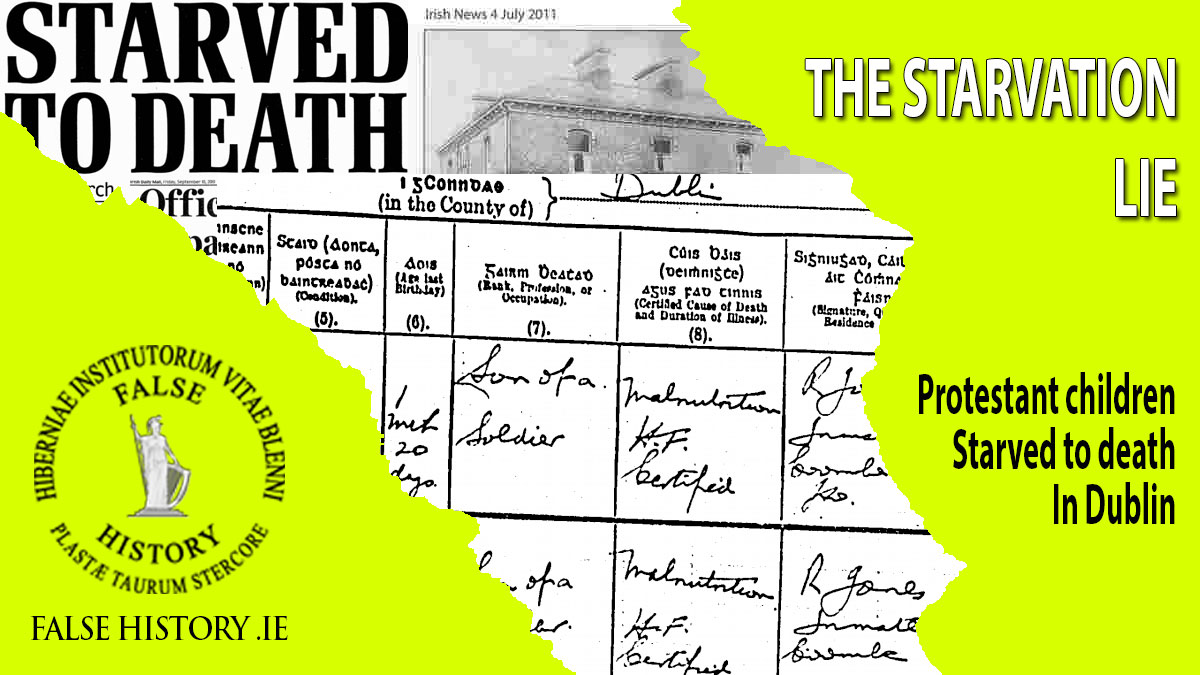 The chief lie upon which the mother and baby scandal relies upon is the claim that babies were starved to death. This relies on a small number of death certificates which record the cause of death as due to ‘marasmus‘. Marasmus is a type of malnutrition that is mostly caused by disease or birth defects. It is a barefaced lie to suggest that it is due to starvation.

The evidence to disprove the starvation claims is abundant and has occurred at all other Irish maternity hospitals, private homes and private institutions which provided care for infants.

Featured below are a sample of death certificates taken from the register of deaths for Dublin where the cause of death was certified as due to marasmus.

The first is of two entries are records of marasmus deaths at the Rotunda Hospital in Dublin. Below that is a scan of one of the many deaths from marasmus which occurred at Temple St Children’s Hospital in Dublin. How is it that the scandal propagators and the conspiracy theorists were not accusing them of leaving babies to starve to death and of murder?

When the evidence is presented it is obvious to any sensible person that ‘marasmus‘ is not a record of starvation. The commission of investigation into mother and baby homes have also exposed these ‘commentators’ as dolts. Here is a relevant excerpt from the final report.

33.5 Some commentators have concluded that infant deaths which occurred in mother and baby homes due to marasmus indicates that infants were neglected, not appropriately cared for, and/or wilfully starved to death in these institutions.

However, marasmus was a frequently cited cause of infant deaths in institutional, hospital and community settings in early twentieth-century Ireland. The Commission considers it unlikely that deaths in hospitals and family homes were due to wilful neglect and so cannot conclude that the term marasmus denotes wilful neglect in mother and baby homes. The more likely explanation is that marasmus as a cause of death was cited when an infant failed to thrive due to malabsorption of essential nutrients due to an underlying, undiagnosed medical condition.

Every maternity hospital in Ireland has deaths due to marasmus but only the Christian institutions were singled out with false accusations of starving babies to death. They were the only institutions subjected to a commission for investigation and this is indicative of anti-Christian bias and of an attack on Christianity. Thus, the book title and a chapter dedicated to defending against these scurrilous accusations. Have a look at this article to see what kind of allegations Irish politicians have made and what if any medical knowledge they based their opinion on. Taken from the parliamentary record.

Why were these hospitals not investigated and accused of starving babies to death? 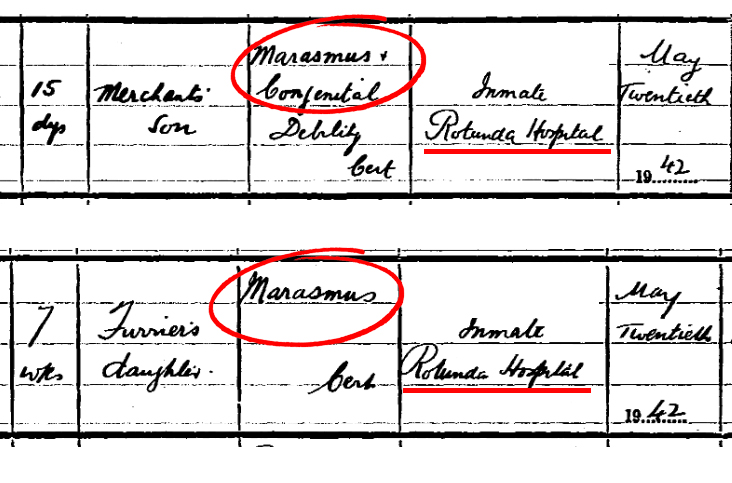 The Irish Attack on Christianity – The Case for the Defence

A new book takes an empirical look at the mother and baby homes scandal and others in what the author claims to be Ireland’s greatest history scandal. A scandal founded upon false allegations, bad history and incompetent statistical interpretation. It drew its oxygen from populism, cultural biases and the prospect of compensation, and it grew into a triumph for ignorance. Babies were not starved to death by religious women, women were not banned from sitting on juries, nor were they banned from doing work ‘unsuited to their sex’ nor did the state create a ‘brutal carceral’ system to confine wayward women. The underlying causes of the mother and baby homes scandal have been allowed to fester for decades due to a breakdown in the quality control systems in academic history. The aim of the book is to apply the quality control methods which should have been in use and seek to discover the reasons for their failure. Read more…