The Mistakes of Catherine Corless 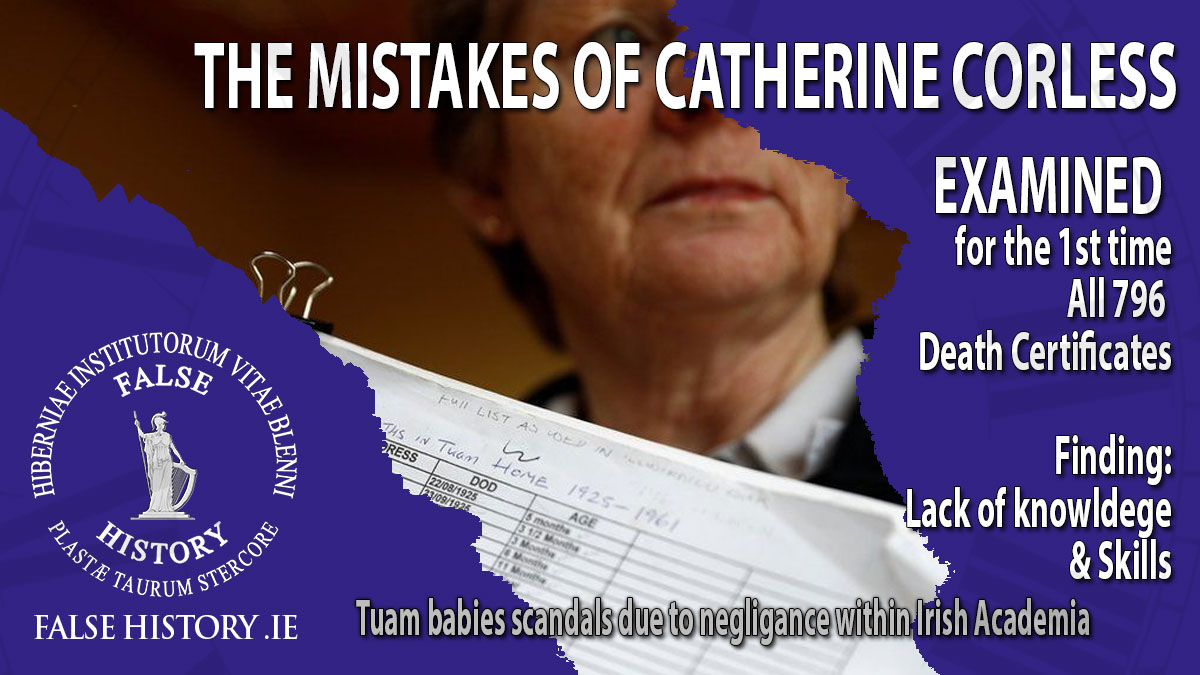 Catherine Corless has put into the public domain the records of children who died at the Tuam Children’s Home but with significant omissions. Had these relevant details been included it would certainly have removed the potential from the media and others to have added their excitable and incompetent interpretation to state death records.

Corless claimed to have uncovered evidence of neglect and abuse at the Tuam Children’s Home when she found that 796 death certificates — mainly those of infant deaths —  occurred at the home between 1925 and 1961. I have now acquired copies of all the 796 death certificates — plus one, which the registrar missed — and can now put back into the public record the missing information.

Corless admits to not being ‘an historian’ and her lack of skill and erudition are evident in her reporting of the historic deaths at the Tuam Children’s Home. To her credit, she has decried, in public, on several occasions, her media conferred title of ‘historian’, as she has no qualifications to use the title. In the early days of the Tuam scandal the media occasionally referred to Mrs Corless as an ‘amateur historian’ but quickly dropped it use for fear it would take the fire out of the story, and of course the use of the full qualification was to imply expertise to lend fake credibility to their fake news.

Therein lies the kernel of the Tuam scandal. Either there are no historians in Ireland with expertise in historic medicine or such was the level of abuse, hysteria and media censorship that all our competent academic historians were kept silent. There were one or two with no expertise in historic medicine who eventually weighed in on the side of scandal promoters. Alarmingly however, their personal, political agendas combined with Irish self-loathing ran riot in a system devoid of functioning quality control measures.

Care was provided not just to unmarried mothers.

The deaths of 78 children who were born to married parents are recorded as having occurred at the Tuam Children’s home. The institution was officially called St. Mary’s Children’s Home, Tuam. Every single record in the state register either refers to it under its official title or simply as ‘Children’s Home’.  All the genuine historical sources show that the intuition functioned as a refuge for women and children. It had a hospital, and the Bon Secours order were highly regarded order of nurses. The order opened and operated another hospital in Tuam for decades and not one single hint of what was supposed to have happened in the neighbouring institution has been reported by the media.

The Tuam Children’s Home has been renamed anachronistically to a ‘mother and baby home’ to mislead the public and further a 21st century agenda.

The vast majority of mothers gave their occupation as ‘domestic servant’, sometimes abbreviated to ‘domestic’. Three children who died were those of ‘Travellers’. Other occupations include one schoolteacher and one actress. However, the second biggest cohort are recorded as the daughters of farmer’s and labourers.

Children born to married parents also died at the Tuam Children’s Home. Again, the vast majority of fathers were farmers or labourers. Other occupations which appear on the registers include, one mechanic, one hawker, two sons of soldiers, two children of tinsmiths, and three children of factory workers.

Poverty remains the most significant factor in high infant mortality rates across the globe today. The occupations of all the mothers and fathers recorded are to cohorts of people most likely to have been living in extreme poverty

All deaths certified by a doctor.

All deaths which occurred at the Tuam Children’s Home were certified by a medical doctor and the details contained of these certificates were duly entered on the state register.

Only four deaths out of the 797 were not marked as being certified by a doctor. These were all due to scribal omissions. When a doctor has not certified a death, registrars are required to record it on the register, usually using the phrase ‘no medical attendant’.  As both of the required phrases are omitted it can only be due to an error on behalf of the person recording the details on the register.

Registrar entries are written in by hand and many different writing styles are observable of the years. These are entries made by various clerks working at the office of the Registrar of Births, Deaths and Marriages at Tuam, Co. Galway.

Galway and Mayo County Councils funded the Tuam Children’s Home, but children were there from other counties.

According to a group representing former residents of the Tuam home — quoting Catherine Corless as the source —  claim that ‘6 single mothers, aged between 24 and 42, died in the Tuam Home between1925 to 1961 and remain unaccounted for’. They name these women as: Annie O’Donoghue, Mary Curran, Mary Joyce Costelloe, Brigid Reilly, Margaret Henry and Annie Roughneen. The source for this information is not given.

Obviously, the sources used by Catherine Corless do not include the official register where all the other certificates are located, and which she obtained.

Let’s look up the state registers for these disappeared women.

Two women named Anne Donoghue died in the district of Tuam between 1925 and 196. None of these women was of childbearing age. There are no listings for Annie O’Donoghue or any variants of the surname.

Sixteen women named Mary Costello died in the district of Tuam between 1925 and 1961. Three of them were of childbearing age at the time of their death and none are recorded at the children’s home. Mary Costello(e) did not die at the home in Tuam.

Five women named Mary Curran died in the district of Tuam between 1925 and 1967. All aged in their 70s and not of childbearing age.

Seven women named Brigid Reilly died in the district of Tuam between 1925 and 196. One of them died age 32 at the children’s home hospital from measles, oedema of the lungs and pneumonia. Her death was certified by a medical doctor and duly entered on the state register.

One woman named Margaret Henry died in the district of Tuam between 1925 and 1961. She died at the children’s home hospital from nephritis and cardiac failure Her death was certified by a medical doctor and duly entered on the state register.

Two women named Annie Roughneen died in the district of Tuam between 1925 and 1961. Both of them died at the children’s home hospital. Annie aged 42 died of pulmonary tuberculosis. Her daughter also named Annie died 15 days earlier from congenital debility. Both deaths were certified by a medical doctor and duly entered on the state register.

Clearly neither Catherine Corless nor the Tuam group looked up the register and based their opinion that women ‘remain unaccounted for’ not of evidence but on fanciful notions. Moreover, they missed the death certificates of at least three other women.

Journalist and author Allison O’Reilly speaking at an event in October 2019 stated:

The people in the home were signing certificates were former residents. Bina Rabbitte was a former resident of the home. I wouldn’t expect her to be educated. She had no medical experience. So am probably no proper life skills.. she spent her whole life in the home..

The name Bina Rabbitte is recorded as the ‘informant’ on nearly every death certificate from 1939 to 1960. The informant is the person who goes to the registrar’s office to report a death and have it entered on the register. If they present the registrar with a note stating the cause of death along with the recognised signature of a medical doctor, the officials enter the details on the register and use the word ‘certified’ under the column titled ‘Certified Cause of Death and Duration of Illness’.

Bina Rabbitte never certified a single death but O’Reilly’s absence of basic knowledge of state registers is abundantly evident. Moreover, that absence of knowledge and skill is behind many more claims which make use of use the imagination and not evidence.

To the best of my knowledge no one — until now — has gone through Catherine Corless’ 796 death certificates and checked if they were reported accurately and to see if they contain any evidence of abuse. Her published list contains the occasional transcription errors but the biggest error by far was not what she chose to publish, but what she left out. It was perhaps accidental and inept, but our academic historians should have spoken out at the earliest opportunity. That is of course using the assumption that Ireland possesses academic historians with the capability to produce work based on quality analysis.

The human mind detests gaps in knowledge so much that it will fill them in using assumptions. Assumptions are a vital part of human intellectual endeavour but experts — before they become experts — are taught to look hard for evidence and not to lazily rely on assumptions until all evidential trails have been exhausted. Such endeavour is beyond the capability of most people who make assumptions without the knowledge to know were to look for evidence.

A wise person makes their own decisions, an ignorant person follows public opinion.