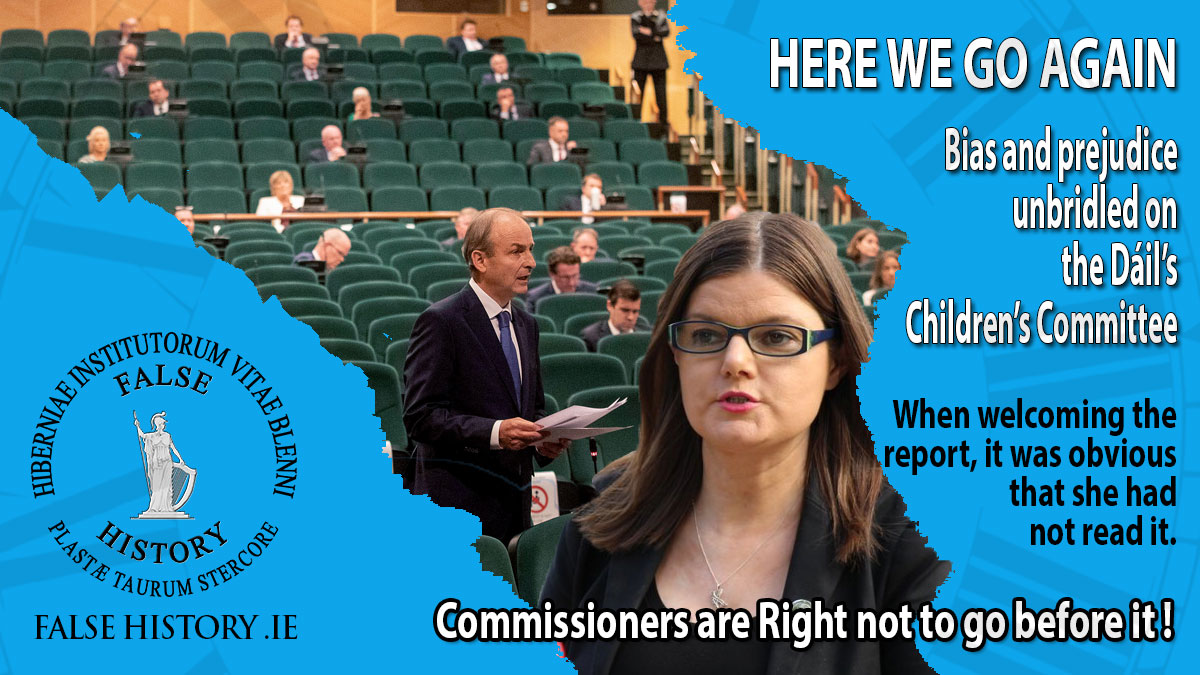 When welcoming the report, it was obvious that Kathleen Funchion had not read it… Speaking in the Dáil  Éireann debate on the 13th of January, the day following the public release of the final report of the commission of investigation into mother and baby homes, Kathleen Funchion (Sinn Féin), Chair of the Joint Oireachtas Committee on children… etc. stated.

KF: ‘Mother and baby homes were not homes, they were detention centres’.

Funchion had not managed to read as far as paragraph eight of the executive summary:

KF: [Women were] forced to give birth in the most appalling conditions, often without medical support or even basic pain relief

Had she been aware at that time that the commission’s report directly contradicted what she was about to say at the Dáil, there is no doubt that she would have attacked the commission’s findings, there and then. Now however, six months later, when she and others realise that the commission have rubbished many of her claims, she now says that ‘the report of the Mother and Baby Homes Commission cannot stand and must be repudiated’.

As it slowly began to dawn on her that her allegations are not supported by evidence, she has followed the only option available — to maintain any semblance of credibility — by calling for the report to be repudiated.

She has been howling from the rafters of Leinster House for the former members of the now disbanded commission to appear before the Oireachtas committee, of which she happens to be the chairperson.

However, given the obvious bias and prejudice which she showed and her motivation to keep her credibility intact, would any sensible person allow themselves to be publicly grilled and abused by political grandstanders.

Clearly many of the witnesses have made false allegations — allegations which stretch credulity to levels where only some sections of Irish society can reach — and the commission have stated, — in an overly polite disposition — that ‘a number of witnesses gave evidence that was clearly incorrect. This contamination probably occurred because of meetings with other residents and inaccurate media coverage’. The amount of inaccurate media coverage has been alarming. It is not really the sheer volume of falsehoods which most alarming, but the ease by which beliefs could be fabricated by the politicians and media, which any normally functioning society would have remained sceptical.

She also said that Irish women operated these institutions as if they were prisons.  We ignored the cries of women and children subjected to ‘torture, deprivation and humiliation on a colossal scale’. She clearly holds the opinion that Irish women are particularly faulty and cruel, all wanting to join an organisation so that they could go about the business of torturing women and children. What was in it for them! Is that not the first question any sensible person would ask not to mind a professional investigator?

There is only one motivation put forward, and the entire scandal rests on this one foundation, women hated unmarried mothers and their illegitimate children. That is what motivated them to kill and torture vulnerable people, not money, not prestige, not notoriety, carrying all that risk for nothing! The risk of excommunication, risk of execution for murder, risk of reputational damage, risk of banishment etc. All that risk for no gain whatsoever.

The science of motivation holds that two things drive human actions: necessities — food, sleep, avoidance of pain; and rewards. There is no reward for killing a baby, unless you happen to be its mother. That is the very reason mother and baby homes were set up in the first place.

Dáil Éireann debate – Wednesday, 13 Jan 2021 Vol. 1003 No. 1
Report of the Commission of Investigation into Mother and Baby Homes: Statements

Mother and baby homes were not homes, they were detention centres. A home is somewhere where one should feel safe, loved and protected, not a place where one is tortured, imprisoned and forced to give birth in the most appalling conditions, often without medical support or even basic pain relief. These walls hid torture, deprivation and humiliation on a colossal scale. Human rights did not exist in these centres. As a mother, daughter, sister and Irish citizen, I cannot countenance this cruelty. The cries of children and tortured mothers were ignored and trivialised by cruel nuns [women] and others who were involved in these institutions, who ran the institutions as if they were prisons.