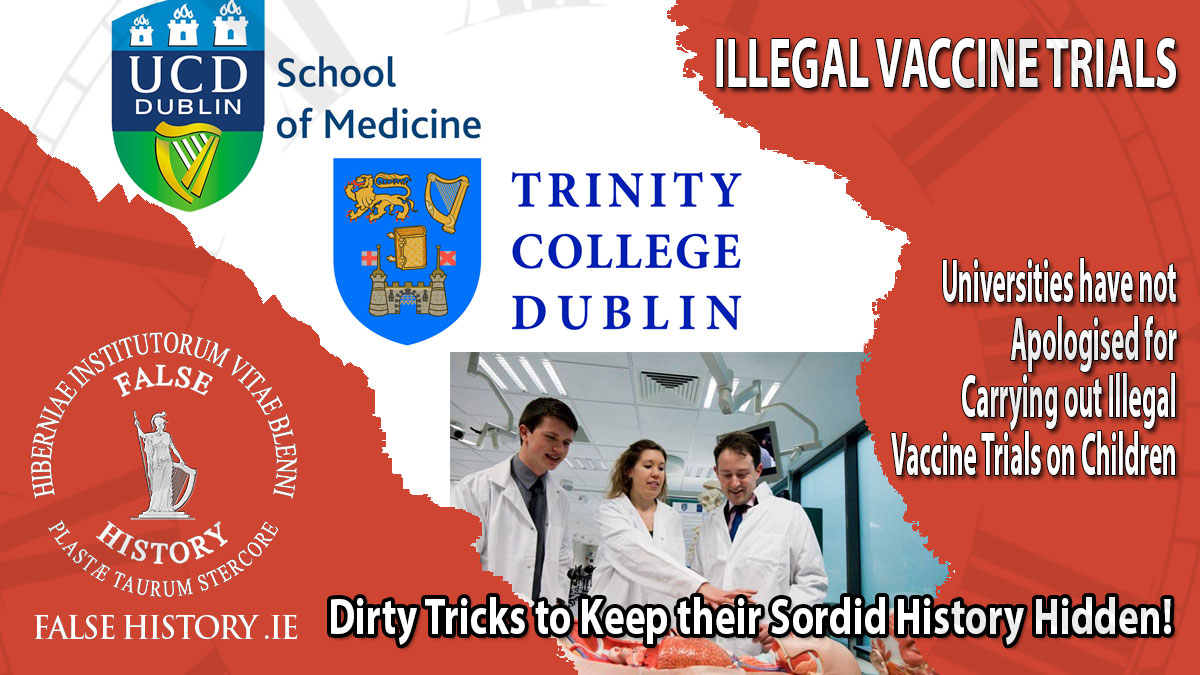 The commission of investigation into mother and baby homes named the following people for conducting vaccine trials on children without obtaining permission. The trials were carried out through an arrangement with doctors in charge of various mother and baby homes. The authorities who ran these homes had no idea that children in their care were subjected to clinical trials. Yet they are falsely made to shoulder the blame, when in fact it is the universities who should get all the blame and pay compensation. However, not one has bothered to issue an apology since they were named in the commission report released in January 2021.

The commission concludes that in many of the trials conducted by these university researchers:

In 1968: Dr Victoria Coffey, ran a trials of Glaxo Laboratories measles vaccine, at Pelletstown, Dublin. The commission say of this trial:

Dr Victoria Coffey was also the institutional medical officer at Pelletstown and facilitated other vaccine trials:

34.70 The Commission has seen no documentary evidence to suggest that the researchers informed the matron or the Dublin Health Authority that children resident in Pelletstown were to be used as research subjects in a vaccine trial. It would appear that Dr Coffey may have been solely responsible for providing Professor Meenan and Dr Hillery with access to Pelletstown.

Even after the commission’s report was published, biased reporting continued with alacrity. The Irish Examiner published an article on 14 January 2021 where the claimed ‘there were at least 13 vaccine trials carried out on more than 43,000 children, according to the Mother and Baby Homes Commission of Investigation.’ The entire article is littered with phrases cherry-picked from the report, conflating information from different areas of the report with as many negative facts as the author can find. I cannot find the total number 43,000 mentioned anywhere, and I doubt if the author summed up all the numbers, as the final report is a compilation of a series of individual reports. The report mentions a figure of 47,000 children who took part in a vaccine trial in Britain in 1964/65, and I surmise that the author mistakenly took this paragraph to be about Ireland and, even then, manage to get the figure wrong.

The author fails to mention that the early vaccination trials of the 1930s were done with the authorities’ support due to ‘one of the worst diphtheria epidemics ever recorded in Europe’. Instead, he continues to weave a tangled web, carefully selecting his facts, taken out of context, and conflating comments about the University College, Dublin studies of the 1960s/70s with earlier studies.

The journalist also fails to mention the commission’s conclusions to each trial: ‘there is no evidence of injury to the children involved as a result of the vaccines.’