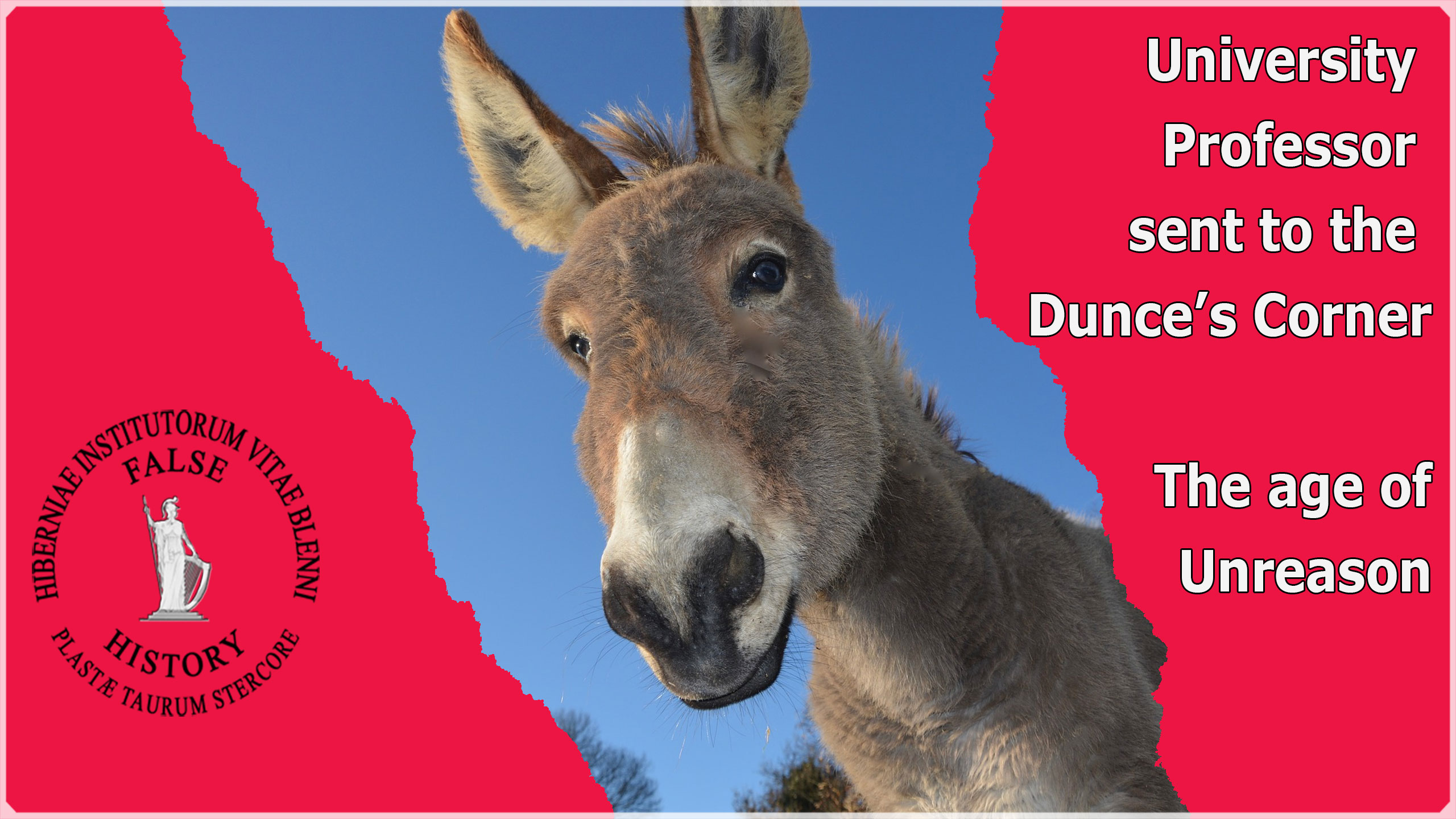 Professor Chris Fitzpatrick’s article in the Irish Times published 13th October 2020 is chiefly remarkable, not so much for its all too common unbalanced interpretation historical events, but for his illusory superiority.

Fitzpatrick declares that ‘in the annals of medical history, it’s rare to come across a medical student who sets out to kill another person.’ Fitzpatrick, as you might guess, is a professor of medicine not of history. It is an entirely false statement and is exemplar of the genre of Irish barstool history. A pseudohistory learned while sitting on or lying under a barstool while a drunken leprechaun spouts out his/her social climbing musings by denigrating others.

Fitzpatrick in this article sets out to denigrate Kevin Barry, a medical student who became involved in the Irish war of Independence. He was captured by the British, tortured and executed on the 1st of November 1920. He was only 18 years old and his hanging made headlines across the globe, his youth and his fight for freedom made him a hero. A song appeared shortly after his death and has been covered by many artists at home and abroad including the great Leonard Cohen.

Many medical students including Ernie O’Malley and James Ryan joined many other medical students and doctors in the fight for independence or as Fitzpatrick would have it, ‘set out to kill another person’. Both returned to and completed their medical studies, Dr James Ryan became the country’s first Minister for Health.

Internationally and throughout history many doctors have taken up arms, or have ‘set out to kill another person’. For example at the Nuremburg Trials seven doctors were executed, with a further ten sentenced to imprisonment. These figures do not account for those doctors and medical students who got away like the most sadistic of them all Josef Mengele. Che Guevara was another famous medic who took up arms and army medics across the world are provided with weapons and are not just medics, but trained soldiers.

Think about the many doctors who were serial killers like Dr. Michael Swango known as  ‘The Poison Doctor’ or Dr Harold Shipman, serial killer with 236 victims and Marcel Petiot: ‘Doctor Satan’ admitted killing 60 people, guillotined in 1946. There are many more killer doctors in the historical record and these may be statistically disproportionate to other professions and the rest of the population.  There is one thing that we can be certain of, and that is that medical students, medics and lofty professors are human like the rest of us. It is clear that gaining a degree in medicine does not validate sanctimonious claims or behaviours.

Fitzpatrick goes on to posit sanctimonious claim on top of sanctimonious claim repeating the much loved canard of the barstool leprechaun. The Christian Brothers taught him ‘jihad’, long before he ever heard of the word. The truth is that all schools taught a history curriculum which was set by the state authorities, they did not teach holy war. In reality, the catholic excommunicated every member of the republican side during the civil war. The undeniable truth is that the history of British rule in Ireland is one of brutality, sectarianism, economic vandalism and more. Anyone who is taught the real history of Ireland will not only not fail to be enamoured with the British, but may even become anti-British. For this very reason, the Irish government toned down the teaching of history in schools during the 1950s, fearing that it was driving recruitment for the IRA. However, there is no denying the savagery which the British government unlashed in Ireland and elsewhere but it is best forgotten but paradoxically, needs to be remembered to see how far society has progressed from the partial removal of an abusive superpower.

Many families and certain sections of Irish society have a long history of siding with the British, and over the centuries have used pseudohistory as a vehicle to aid their illusions of social standing. The corollary is that it is achieved through the denigrating of others and Fitzpatrick, despite what some might see as high position within the Irish social simply repeats the well-worn denigrations of the Seoníns and the Jackeens. These are derogatory teems given to Irish people who side with the British to attack their fellow country men and women. The first translates as little Georges and the latter is specifically aimed at Dublin people who have a love of the Union Jack.

Fitzpatrick brings nothing new to the Irish history but what is most noteworthy is his repeat of an ignorant diatribe which is emblematic of just how far the standards have fallen in Irish academia.

Btw and fyi Prof, The Troubles in the North of Ireland were started by the loyalists, that is those Irish people who consider themselves to be British. The first bombs of the troubles were detonated by the UVF, who attacked targets within the United Kingdom and outside it at places like the Garda detective bureau in Dublin, the RTÉ studios and the O’Connell Monument both in Dublin, the Wolf Tone monument at Bodenstown, Co Kildare and the Ballyshannon Power Station in Donegal. All took place in 1969 while loyalist mobs were attacking catholic homes and business, which resulted in the formation of the Provisional IRA in December 1969. The organisation’s genesis arose from the need to protect innocent civilians from loyalist and RUC attacks. The British army was sent to Northern Ireland with the very same mission to protect catholic areas. The Provisional IRA campaign aimed at ending British rule in Ireland did not get underway until 1971, by which time the loyalists paramilitaries had bombed more targets outside the United Kingdom, like a school class room in Donegal, an electricity substation at Tallagh, Co Dublin, a TV relay station near Raphoe in Donegal, the railway line at Baldoyle, Co Dublin. The attacks continued both inside and outside of the UK for the duration of The Troubles.

The first RUC man to die was shot dead by the loyalists, it was a blunder, the intended target was a catholic officer standing beside him. Blunder was never far away from the UVF. In 1971, a UVF squad was ordered to bomb an IRA run pub in Belfast but upon arrival thought that the target was too hard and so planted the bomb at a nearby bar. It exploded without warning killing 15 innocent people, the highest death toll for a single incident in Belfast of the troubles.

‘The Troubles’ did not start as a result of an IRA campaign and it is time the ignorant and drunken leprechauns who preach such pseudohistory were kicked out of the college bar.

A dunce’s corner was a form of punishment used by teachers of the past. Pupils who gave wrong answers to the teacher’s questions were labelled a dunce, a synonym of simpleton, and were made to go and stand in the corner of the classroom. Sometimes children were forced to wear a conical shaped hat called the dunce’s hat.  If any teacher carried out such punishments today, it would be labelled child abuse.

‘Chris Fitzpatrick: It is wrong to commemorate Kevin Barry’
https://www.irishtimes.com/opinion/chris-fitzpatrick-it-is-wrong-to-commemorate-kevin-barry-1.4379523